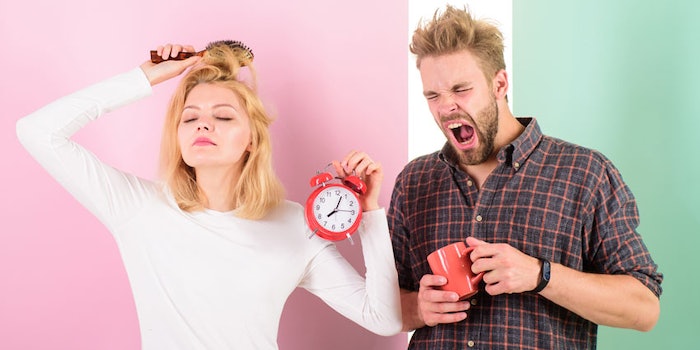 Getting a good night's sleep is vital to the skin, brain and body. In fact, with sleep health being named as one of the top seven wellness trends for 2019, it has become apparent how important sleep actually is.

A misconception many people hold is that they can "catch up" on their beauty sleep by sleeping in over the weekend. However, a study published in the National Library of Medicine found that this can worsen the already negative side effects your body is experiencing from lack of sleep, specifically when it comes to the metabolism and insulin sensitivity.

Sleeping on the Job

The sleep patterns of 36 voluneers were measured over two weeks in the study, led by Kenneth Wright, Jr., Ph.D., professor integrative physiology at University of Colorado Boulder. The study started by splitting the participants into three groups and allowing all of the volunteers in each group to partake in three nights of normal sleep, which is defined as seven hours of sleep per night.

During the two weeks, the researchers studied the eating habits of the volunteers as well as monitored any weight gain and changes in insulin sensitivity.

Catching Up on Conclusions

Researches noted that consistent sleep deprivation quickly distorted the metabolism, and the volunteers who only slept five hours per night snacked more after dinner than those who slept a normal amount. It was also observed that these individuals gained an average of three pounds by the end of the study, and their bodies' sensitivities to insulin decreased by 13%.

While group three was allowed to sleep in as late as they wanted to for two days, the group only managed to get an average of three extra hours of sleep over the two nights, which did not make up for the amount that they lost during the week. Further, the extra sleep that volunteers in group three received caused disrupted their body rhythms and caused them to wake up when their body was telling them to sleep. These volunteers experienced a 27% decrease in insulin sensitivity over the two weeks, and, more specifically, they were the only group wherein liver and muscle insulin sensitivity decreased.

“The key take-home message from this study is that… weekend recovery or catch-up sleep does not appear to be an effective countermeasure strategy to reverse sleep loss induced disruptions of metabolism,” Wright said in an interview with National Institute of Health.