The Boys of Botox 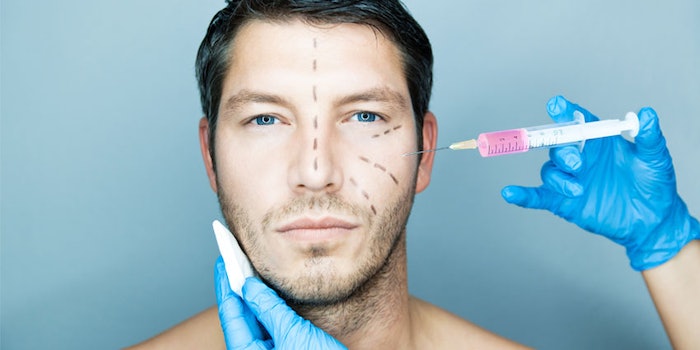 Men are a fast-growing segment of consumers in the esthetic market, yet they can be underrepresented in an often female-dominated industry.

But it seems the tide is changing.

A survey by Allergan found that 48% of men would be open to discussing treatment for facial wrinkles with a doctor in the next two years. Additionally, 71% say they want to look good and almost half are willing to spend money on their facial appearance—40% of which would spend more than $250 for a single treatment.

71% [of men] say they want to look good and almost half are willing to spend money on their facial appearance—40% of which would spend more than $250 for a single treatment.

It’s no wonder then that men are getting botulinum toxin type A, or Botox, injections now more than ever. Jenya Titova, director of med spa operations at Miami’s Hochstein Medspa, said the two driving forces are workplace pressure and social media.

“A polished appearance in men helps them feel more confident, have stronger interpersonal relationships and stay more competitive in the job market,” she explained. “Another big trend is the prevalence of social media where your appearance is everything, especially when it comes to online dating. … It's also become more accepted in today's world so they don't feel ashamed to get Botox, waxing, hair restoration or even manicures.”

The American Society of Plastic Surgeons found that Botox injections were the top-performed minimally invasive procedure in 2015, with 6.7 million procedures—an increase of 1% from 2014 and 759% from 2000.

“Men are looking for an easy procedure they can do in an hour, which is discreet.” —Jorge Gaviria, M.D.

When men get Botox injections, they differ from women in that they are more prone to have their whole face done if instructed by an esthetic professional, according to Titova. Key injection areas for men include:

“Most men are generally concerned about their appearance just as women are although most don't admit it. Social media forces men to critique themselves more than ever,” said Titova. “When they don't like what they see, they want a fast solution. Others are even pressured by their wives or girlfriends.”

Titova recommends that men start getting Botox injections as a preventative measure in their 30s, however, “It’s never too late to start smoothing the lines,” she said.

While their reasons for seeking Botox injections vary, Jorge Gaviria, M.D., medical director of GaviriaMDHair, believes the main attraction for men is discretion and no downtime.

“Men are looking for an easy procedure they can do in an hour, which is discreet,” he said. “They prefer not to go under the scalpel. Botox every three months is worth it for men who want to look 10 years younger.”

Gaviria adds that for med spas to attract more male clientele, it is important to create a gender-specific approach to treating male patients as well as creating specific marketing for the male demographic.

“It’s also pivotal to bring cosmetic surgeons who specialize in various treatments aimed at men, such as hair transplant surgeons [and] cosmetic fellows together,” he said. “These professionals understand the anatomical differences between genders: larger foreheads, more vascularized faces, bigger muscles, protruding mandible, wider glabella, less facial fat than women and increased skin thickness for example. Then men can feel confident that they are being given customized treatments.”