Food Choices Can Have an Impact on Skin Health

The old adage “you are what you eat” not only applies to our overall health and nutrition, but how our skin looks and feels as well. As the largest organ in the body, our skin can benefit from the same nutrition we get from foods that have a positive effect on our heart and other major organs. In fact, new research suggests that eating foods rich in protein and certain vitamins and minerals might provide valuable anti-aging effects.

In recognition of National Healthy Skin Month, dermatologist Susan C. Taylor, MD, FAAD, assistant clinical professor of dermatology at the College of Physicians and Surgeons at Columbia University in New York, N.Y., and clinical assistant professor of dermatology and associate faculty of the School of Medicine at the University of Pennsylvania in Philadelphia, Pa., spoke at the American Academy of Dermatology's Academy about the importance of eating nutritious foods for optimal skin health and how foods can aggravate common medical skin conditions.

“While there's no mistaking how our diet affects our overall health, we're just beginning to understand how certain foods—or lack thereof—can impact our skin's health,” said Dr. Taylor. “In addition, studies show that some food and beverages can even worsen common skin conditions and cause allergic reactions that manifest on the skin.”

Good Food, Good Skin
Perhaps the simplest way to maintain a healthy, balanced diet and ensure the skin is getting optimal nutrition from the foods we eat is to follow the recommendations of the U.S. Department of Agriculture's (USDA) Daily Food Guide, commonly referred to as the food pyramid. These include:
* Choosing and eating at least three ounces of whole grain breads, cereals, rice, crackers or pasta.
* Eating a wide variety of fruits and vegetables, including more dark green and orange vegetables.
* Consuming calcium-rich foods, such as fat-free or low-fat milk and other dairy products.
* Opting for a variety of low-fat or lean meats, poultry and fish.

“The foods recommended by the USDA as part of a healthy diet contain valuable vitamins and minerals that have proven health benefits for our bodies,” said Dr. Taylor. “Research has shown that the antioxidants in vitamins C and E can protect the skin from sun damage and help reduce damage in skin cells caused by harmful free radicals, which contribute to aging skin. Similarly, we have long known that the B vitamin biotin is responsible for forming the basis of skin, hair and nail cells, and vitamin A—found in many fruits and vegetables—maintains and repairs skin tissue. Without an adequate supply of these vitamins, you may notice it in the appearance of your skin, hair and nails.”

While the direct link between food consumption and skin damage has not been widely studied, one study comparing the correlation between food and nutrient intake with skin wrinkling found a positive relationship. The study, “Skin Wrinkling: Can Food Make a Difference?”, published in the February 2001 issue of the Journal of the American College of Nutrition, determined that Swedish subjects aged 70 and older had the least skin wrinkling in a sun-exposed site among the four ethnic groups studied. This cross-sectional study, which analyzed the pooled data using the major food groups, suggests “that subjects with a higher intake of vegetables, olive oil, and monounsaturated fat and legumes, but a lower intake of milk/dairy products, butter, margarine and sugar products had less skin wrinkling in a sun-exposed site.”

“More studies need to be done to determine the long-term benefits of food on our skin,” said Dr. Taylor. “Eating a variety of healthy foods and drinking plenty of water so the skin stays hydrated should help most people improve the appearance of their skin.”

Foods That Can Worsen Skin Conditions
For the millions of Americans affected by medical skin conditions such as acne, rosacea, eczema or psoriasis, eating certain foods or consuming alcohol could aggravate their symptoms or trigger an unexpected flare-up. Dr. Taylor recommended that patients affected by these chronic skin conditions should be aware of certain food interactions in order to better manage their treatment regimen.

Contrary to popular belief, acne is not caused by the foods we eat. Although numerous studies have not found a link between diet and acne, emerging research now suggests there may be a link between a low-glycemic diet and an improvement in acne. The study, “Low-Glycemic-Load Diet May Improve Acne in Young Men,” published in the July 2007 issue of the American Journal of Clinical Nutrition examined whether male acne patients aged 15 to 25 who followed a low-glycemic diet—25% of energy from protein and 45% from low-glycemic-index carbohydrates—had a reduction in acne lesions versus a control group that consumed a diet rich in carbohydrates.

“The study found that at 12 weeks, acne lesions had decreased more in the young men in the low-glycemic group than their counterparts in the control group whose diet had no consideration for the glycemic index,” said Dr. Taylor. “This suggests that there could be a relationship between limiting carbohydrate-rich foods in acne patients' diets and an improvement in their acne, but more studies need to be done to confirm this finding before we consider any future dietary modifications for our patients.”

On the other hand, some acne patients have noticed that certain foods worsen their symptoms—particularly chocolate, greasy foods, soft drinks, peanuts or foods high in fat.

“Patients who notice a cause-effect relationship between eating certain foods and acne flare-ups should avoid those foods,” said Dr. Taylor. “However, following a strict diet will not clear acne either. The best advice is to eat a well-balanced diet and follow the treatment plan recommended by your dermatologist.”

Rosacea, characterized by facial redness and swelling, commonly can be triggered by spicy foods or alcohol. In fact, a survey conducted by the National Rosacea Society found that the most common rosacea triggers are alcohol—52%, spicy foods—45%, and heated beverages—36%.

“Patients with rosacea should keep a journal to track their food and beverage triggers, so they can record how the experience made them feel and remind themselves to avoid these items in the future,” advised Dr. Taylor. “They also should read the labels at the grocery store and proceed with caution when it comes to spices, such as cayenne, red, black and white pepper, curry, chili powder, and even salsa.”

In addition, foods such as liver, vinegar, soy sauce, dairy products, certain fruits and vegetables, hot chocolate, cider, tea and coffee have been known to cause flare-ups in some rosacea patients.

Another chronic skin condition that can be aggravated by food is eczema, which is commonly characterized by dry, red and itchy patches on the skin. Foods that have been known to worsen eczema symptoms include eggs, milk, peanuts, soy, wheat and fish, while some patients even report that chocolate, coffee, alcohol, tomatoes and sugar can trigger a flare-up. Dr. Taylor added that juices from meats and fruits can irritate already-sensitive skin when they come in contact with the skin, and she suggested that eczema patients also should keep a trigger journal as a reference for what foods or drinks may have caused a flare-up.

Research has shown that psoriasis, a serious medical condition affecting the autoimmune system and characterized by patches of raised, reddish skin covered by silvery-white scales, can be triggered by heavy drinking and that alcohol consumption may even inhibit the effectiveness of psoriasis treatment. Dr. Taylor cautioned psoriasis patients who drink to do so in moderation and to avoid alcohol if they suspect it is worsening their symptoms.

“While certain foods also can trigger psoriasis, patients should avoid any radical diets that claim to 'cure' psoriasis,” explained Dr. Taylor. “There is not a cure for psoriasis and extreme changes in diet actually can worsen symptoms.”

Dr. Taylor added that individuals who have any questions about how their diet can affect the health and appearance of their skin should discuss their concerns with a dermatologist. 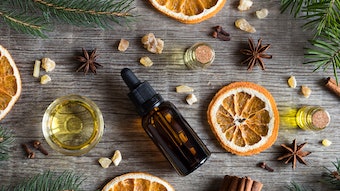 5 Holiday Essential Oils to Cheer Up your Treatment Room

These five essential oils are proven to bring out the best in any holiday setting—they smell great and offer more benefits than just a pleasant aroma.
Dec 13th, 2022