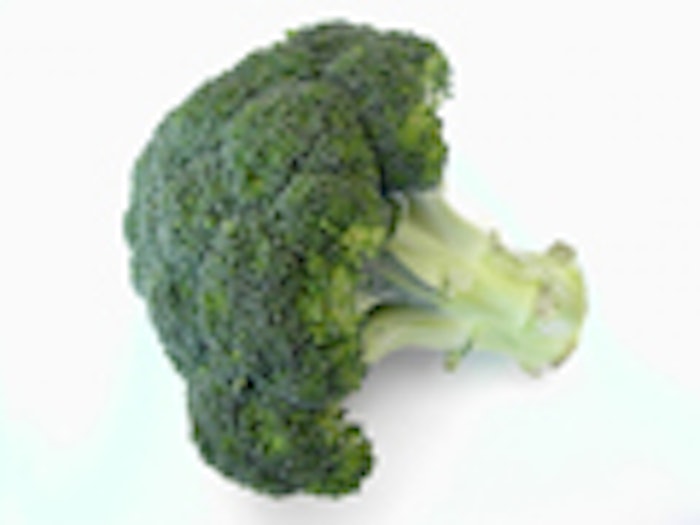 What's good for your diet may also guard against skin cancer.

Scientists have discovered that an extract of broccoli sprouts protects the skin against the sun's harmful ultraviolet rays.

That's not the same as calling the extract a sunscreen, however.

"This is not a sunscreen, because it does not absorb the ultraviolet rays of the sun," explained Dr. Paul Talalay, a professor of pharmacology and molecular sciences at Johns Hopkins University School of Medicine in Baltimore. "We don't want people covering their bodies with broccoli and going to the beach. They will have no protection whatsoever."

Exposure to ultraviolet or UV rays is the primary cause of most skin cancers. The incidence of skin cancer in the United States is on the rise as men and women who had too many sunburns earlier in life get older and develop the disease.

Talalay started working on skin cancer prevention about 25 years ago. "Cells contain an elaborate network of protective genes that code for proteins that protect against four principal injurious processes to which all of our cells are exposed and which are the causes of cancer, degenerative disease and aging," he explained.

The cells' protective system normally operates at about one-third capacity, so the real question is what would ramp up that system.

"Our strategy has been to find things that will boost the system," Talalay explained. Broccoli, in particular, has previously reported to have some anti-cancer effects.

"We looked in vegetables, and it turned out they had a rather large quantities of a compound that induced this system, particularly in cruciferous vegetables such as broccoli, cabbage, Brussels sprouts, et cetera," Talalay said.

The compound, called sulforaphane, is found in broccoli sprout extracts and was first identified by Talalay and his colleagues more than 15 years ago. Sulforaphane has been shown to inhibit tumor development in animals.

For this study, Talalay and his colleagues tested the compound in both mice and humans.

The human experiments involved six healthy volunteers. Each participant was exposed to UV radiation on two circles on their back that were either treated or not treated with different doses of broccoli extract.

The highest doses of the extract reduced UV-induced redness and inflammation (erythema) by an average of 37 percent, although protection varied from 8 percent to 78 percent.

"If you apply an extract of broccoli sprouts that contains high levels of sulforaphane to regions of human skin, you can protect them very substantially," Talalay said. "We believe, to the best of our knowledge, that this is the first demonstration of protection against a known human carcinogen in humans."

One expert was excited by the discovery.

"There is some interesting data here," said Dr. Vijay Trisal, an assistant professor of surgical oncology at the City of Hope Cancer Center, in Duarte, Calif. "Sulforaphane compounds have been known to boost the immune system locally. This has some basic science behind it."

"The same thing happens with interferon, which we use for melanoma. It boosts the natural killer cells," Trisal explained.

The findings do need to be replicated, Talalay noted.

"It's going to take a little while to work out how this should be applied," Talalay said. "We would need to have a preparation rich in sulforaphane that would be easily absorbed through the skin, and this is not yet a reality. But, since we're dealing with a food, we're not dealing with anything likely to have a toxicity."

The study is published in this week's issue of the Proceedings of the National Academy of Sciences. Talalay and a co-author are unpaid consultants to Brassica Protection Products LLC (BPP), which licenses the technology to produce broccoli sprouts. These two authors, along with Johns Hopkins University, are equity owners in BPP. Antony Talalay, son of Paul Talalay, is chief executive officer of BPP.