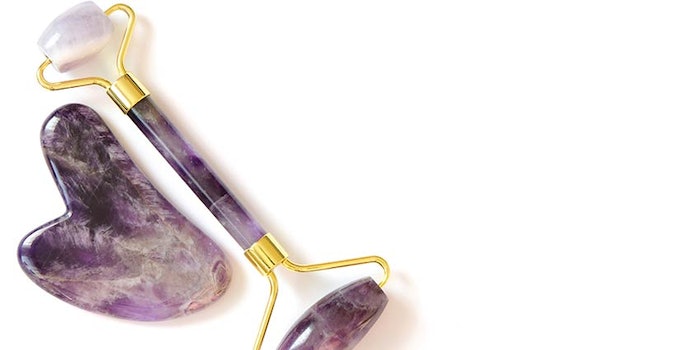 Gua sha has existed in traditional Chinese medicine (TCM) for thousands of years as a way to alleviate symptoms of various ailments. This practice, and other areas of Chinese medicine, have been passed down for generations based on the idea of a connection between one’s mind, body and energy (qi). Gua means press or scrape and sha means redness or flush.

In history, gua sha was commonly used to alleviate muscle soreness, tension, and pain by increasing the body’s blood flow and improving lymphatic stagnation through scraping a tool, stone or one’s own hands across certain areas of the body.

It was not until the Song dynasty (960-1279 CE) that anything resembling the practice of cosmetic scraping appeared, in the form of jade rubbing to treat facial scars in the Northern Song era. TCM continued to influence new ideas in facial gua sha in the Qin and Han dynasties, which unified China through the 20th Century.

These beliefs showed how the human body and skin color changed directly, effecting the behavior, temperament, age, health, qi and blood of an individual. In the 20th century, the work of Jiang Jingbo and later Lu Jiru was recorded. Gua sha is sometimes referred to as “coining” or “spooning,” as it was historically done using a ceramic Chinese soup spoon or a coin.

Gua sha has been reinvigorated and modernized, and various styles of gua sha therapy within TCM were adapted. The development of gua sha is something that is far from being static and is constantly reborn, developed and improved throughout its history.

Continue reading about  the benefits of gua sha in our Digital Magazine...