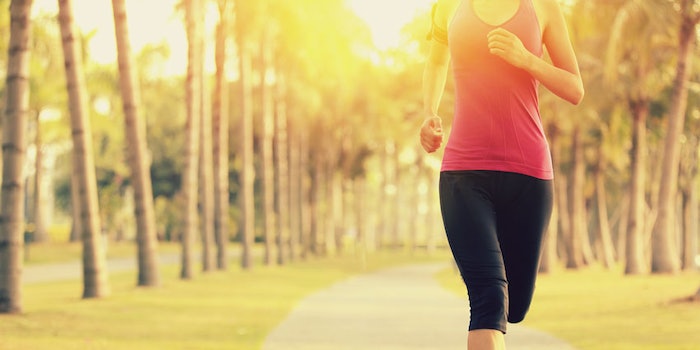 April brings more than showers, with the 122nd Boston Marathon commencing on April 16, 2018. In the spirit of this global event, we thought we’d discuss skin safety practices for those that take to the course of spending a portion of their daily routine running outside.

The quintessential runner is ingrained in our minds as wearing a very thin, porous “uniform” consisting of a tank top and shorts. This makes for breathability and little environmental resistance due to the seeming lack of coverage. That said, with the exposure of one’s skin in this scenario, the subjection of damage due to harmful UV radiation is imminent without remedial effort.

Don’t get sunburned. You’ve heard this said 100 times over, but there’s still the mindset of ‘well, eventually it will turn into a tan.’ This is a very wrong way to think. Did you know your risk for skin cancer doubles if you’ve had more than five sunburns? That doesn’t make those end-product tans very appealing now, does it?

Don’t think the clouds will be your protection either. Just because it’s a bit cloudy out doesn’t mean that the sun’s rays aren’t penetrating the overcast appearance and right into your skin. In fact, 80% of said harmful UV rays still find their way into your skin even in cloudy conditions.

Here are a handful of productive ways to make sure you’re doing what you can to make that healthful run as healthy as possible.

Use sunscreen. And use it often. Apply it every two hours for maximum protection.

Remember your lips. Use a lip balm with SPF in it. Your lips are an easy target, and are one of the most common spots on one’s body for developing skin cancer. And while we’re at it, don’t forget about the top of those ears too.

Get the proper headgear. In general, it’s a good practice to wear hats, headbands or bandannas to protect your head. This is even more important if that lush head of hair isn’t lush anymore.

Wear sunglasses. Because without your eyes, how are you going to navigate that course? Shied the glare, and the harmful UV rays from those colorful corneas.

Invest in protective clothing. We already talked about the “typical” runners garb. Purchase running gear that is rated for sun safety. Also, consider “cooling sleeves,” which are being utilized more and more by runners and other athletes. Cooling sleeves wick away moisture and create a barrier preventing UV rays from penetrating your skin.

Plan your timing.This is a big one, as the timing of your run can greatly influence the power permeating from the sun.A general concept would be to run early or late. By early we mean before 10am, and by late, after 4pm. It’s always a good idea to seek shade while you’re running, especially during “peak” hours of the day, which happen between 10 and 4.

Have fun while you run. Stay safe and protect yourself from the damage the sun can cause, and, of course, don’t forget to stay hydrated!

Is SPF in moisturizer enough? How often should sunscreen be reapplied? Licensed medical aesthetician, Natalia Sadowski, answers those question and more.
Jul 1st, 2021