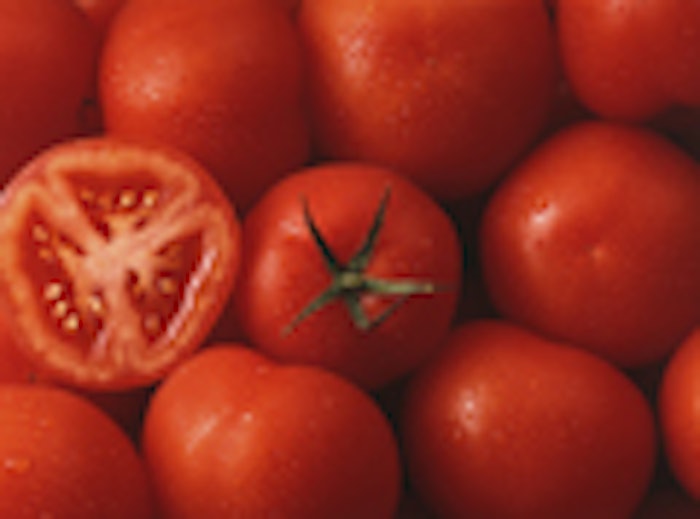 Subjects who consumed tomato paste were found to have 33% more protection against sunburn, compared to the control group, researchers from the Universities of Newcastle and Manchester presented at the British Society for Investigative Dermatology this month.

The research taps into one of the newest trends in nutritional foods--the "beauty from within" segment, which is predicted to become a strong niche during the next few years.

The researchers recruited 20 people and randomly assigned them to receive 55 grams, or five tablespoons, of standard tomato paste with 10g of olive oil daily, or just olive oil, for 12 weeks.

The skin of the volunteers was exposed to UV light at the start and end of the trial, and the researchers found the tomato paste-supplemented group had 33% more protection against sunburn than the olive oil only-fed group. This level of protection was equivalent to a sunscreen with a sun protection factor (SPF) of 1.3, said the researchers.

The benefits of the tomato paste were attributed to the lycopene content that may neutralize the harmful effects of UV light due to the excess production reactive oxygen species (ROS), which can damage important skin structures.

Skin samples taken from the subjects indicated that the tomato paste-supplemented individuals had higher skin levels of pro-collagen, a molecule which gives the skin its structure and loss of which leads to skin aging and lack of elasticity.

Co-researcher professor Lesley Rhodes said, "The tomato diet boosted the level of pro-collagen in the skin significantly. These increasing levels suggest potential reversal of the skin aging process. This is in addition to the significant reduction in sunburn.

"These weren't huge amounts of tomato we were feeding the group. It was the sort of quantity you would easily manage if you were eating a lot of tomato-based meals.

"People should not think that tomatoes in any way can replace sun creams, but they may be a good additive. If you can improve your protection through your diet then over several years, this may have a significant effect."

Benefits extend to DNA
Attendees at the annual meeting of the British Society for Investigative Dermatology also heard lycopene was capable of reducing damage to mitochondrial DNA in the skin, which is also believed to be linked with skin aging.

"The protective effect of eating tomatoes on our mitochondria is important as they are the energy producers in all our body cells including skin," said Professor Mark Birch-Machin. "Therefore being kind to our mitochondria is likely to contribute to improved skin health, which in turn may have an anti-aging effect."

Independent comment
Commenting on the results, Nina Goad of the British Association of Dermatologists said, "While the protection offered by lycopene is low, this research suggests that a diet containing high levels of antioxidant rich tomatoes could provide an extra tool in sun protection."

Opportunities for beauty from within
This is not the first time that lycopene has been reported to boost skin health from within. Indeed, Israel's LycoRed has already developed a carotenoid ingredient for supplements which is aimed at protecting the skin from sunburn. The ingredient is a carotenoid composition of lycopene, phytoene, phytofluene and optionally vitamin E that protects the skin from the damaging effects of UV radiation.

Increasingly, companies already involved in the functional food market have been looking to spread into the cosmeceutical arena. A recent Datamonitor report predicted the overall European cosmeceuticals market to grow to $4.4 billion in 2009, up 5% from today. This includes all cosmetic products containing at least one bio-active ingredient for the skin.

The journal New Nutrition Business' “10 Key Trends in Food, Nutrition and Health 2008” report earlier this year adds further weight to the importance of the beauty segment. Author Julian Mellentin said the charge in Europe is being led by the dairy sector.

He said, "Beauty foods … offer a real opportunity to create new demand in a place where there are few competitors. They are capitalizing on the connection the cosmetics industry has been building in consumers' minds over the last three to four years.

"The single-biggest event in food and health of 2007 was the European launch by Danone of its Essensis beauty yoghurt--one of the boldest moves in the nutrition industry in recent years."