Welcoming the World To Organic Farming 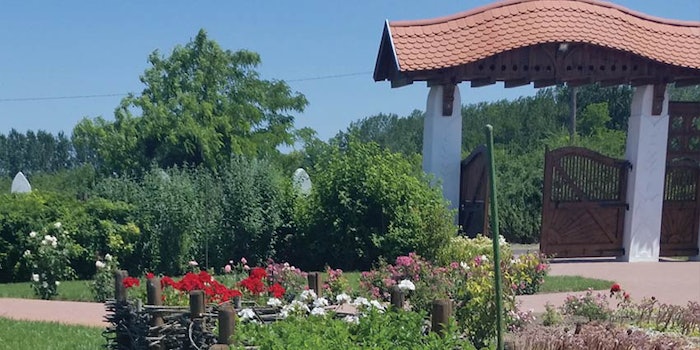 Budapest, Hungary—steeped in history, culture and architectural beauty—is one of the hottest tourist destinations in the world. Bisected by the Danube river, the 19th Century Chain Bridge connects the hilly Buda district with lively Pest. Tourists come from around the world to see the city’s sites and dine on famous Hungarian cuisine.

However, tourists now might be adding a sleepy little village called Fülöpjakab to their Hungary must-see lists. About an hour away from the bustling Budapest and nestled between the village’s green and lush working farms is Éminence Organic Skin Care’s memorial to the company’s achievement: the Éminence Certified Organic Farm.

“The display organic farm was created to showcase the hardworking, international success of Éminence and the people who made it happen,” said Boldijarre Koronczay, president. “It’s open to the world, and it will show future generations what organic farming can do.”

Not your average “farmer,” Koronczay is known for his in-depth knowledge of skin care, charismatic charm and unbeatable treatment techniques. However, his passion for organic farming runs as deep as the people’s who work the lands in Hungary.

Koronczay gave Skin Inc. magazine a tour of the display organic farm this past June when the plants started to bloom and grow green as well as shared his insights into what went into developing the farm, its features and the importance of organic farming.

The Lay of the Land

Fülöpjakab was selected for the site for several reasons. The town is snuggled between two rivers that snake in and out of the land. The rivers moved minerals for thousands of years, making the area green and fertile. Although the soil is sandy, it’s rich with nutrients and ideal for growing.

“Fülöpjakab also has the highest number of organic farmers, which is important,” said Koronczay. “You don’t want your neighbors using artificial fertilizer, and it getting into the water supply.”

Speaking of water supply, thermal water is used, which is also high in minerals. The farming community drills down to tap the flow.

A Sampling to See

According to Koronczay, the display organic farm offers a sample of the plants Éminence uses in its skin care lines. “All over the country are small micro climates,” he said. “Farms throughout Hungary are able to grow the majority of the ingredients we use.”

While over 80% of the ingredients used for the company’s skin care come from Hungary, 100% of the innovation is from the country. Ingredients and innovation are then brought to Canada where the products are produced.

“Unfortunately, we cannot grow everything in Hungary because some plants we use do not originate and thrive here,” he said. “So we do source some ingredients from places like Greece and other areas, but they all must be organic.” The company works with the governing bodies and authorities to guarantee authenticity.

Stars of the Farm

Here’s a small sample of what visitors see on he farm and how they help with skin care.

Rhubarb. Boil the stalks with water, and it can help to increase appetite. In skin care, it hydrates dry skin.

Sage. The herb helps with sore throats when brewed as a tea. It can also combat acne and rosacea.

Red current. This fruit can be made into a sauce much like cranberry. It’s high in aspartic acid.

Comfrey. This plant helps to soothe minor scratches, rashes and bug bites, as well as reducing the signs of aging.

As important as the selection of the plants, so too were the features developed, including the shape of the actual display organic farm. From a bird’s eye view, it’s in the shape of the tree of life, Koronczay’s vision to both honor and be in harmony with nature.

“It’s important to bring life together in harmony,” he said.

Grand entrance. Standing over 18-feet tall, the sun motif on the gates was hand carved, and the motif runs throughout the farm—sun being important for the crops. The circles at the top are bird houses for larks, doves and starlings. Even the hand-carved tulip (for abundance) and sunflower symbols (invitation for the sun) tie to producing the best crops

Chicken coop. Although there currently weren’t chickens on the farm during the visit, their home is ready. Woven like a basket, the building is comprised of straw and clay. Its thatched roof also lets the sunlight shine through

Compost beds. A sweet angelic figure adorns each side of the compost beds. These angels guard over the plants as they decompose to one day feed new crops.

Lily pond. Although you might not see them, you’ll definitely hear the croaking of the frogs amongst
the lily pads.

Lángos oven. Featuring iron doors and latch to keep wood burning, the oven is the centerpiece to the outdoor kitchen. It is ready to bake delicious lángos, a bread baked in the oven and then spread with fresh garlic, butter, sour cream and cheese.

Grape press. The farm features a century-old press with a small plaque that pays tribute to Röck István, the manufacturer who built the restored press. Grapevines were selected to weave a fence around the press for their pliability and sturdiness.

Much like any organic farm, Éminence Certified Organic Farm relies on natural elements to protect its crops from pests and to feed its lands.

Instead of using pesticides, organic farmers turn to nature to protect their crops. For example, rosemary is brewed much like a sun tea and included in an herbal mixture that is sprayed on crops. “Bugs hate rosemary,” said Koronczay. “Before refrigeration, people used to rub meat with rosemary and salt to preserve it.”

Many farmers use flowering bushes which attract bugs away from fruits. They also use apricot and honey traps to trap bugs in sticky paper.

As for fertilizer, it’s also natural all the way. “While the plants grow rapidly [with chemical fertilizer], it’s as if they were given Red Bull. They’re inflated, but it’s mostly water with no real vitamins,” said Koronczay.

Organic farms use composting where 10-20% of growth is broken down and rotted to create an herbal tea that is then sprayed on the vegetation. “You’re not robbing the land,” he said. “And, you’re not holding back the nutrition.”

Planting and harvesting are based upon the alignment if the stars, Earth and moon. During high tide, water is pulled up by the full moon. “Planting is more successful during this time,” said Koronczay. “Also, fruit is harvested at this phase because its more flavorful and filled with vitamins.”

While formulating with organics is science, it’s not always exact, according to Koronczay. Although they use the same ingredient, it’s not always the same. He shared the example of the stone crop they use.

“It’s green, but in the fall, some species turn red,” he said. “While it would have the same properties, research showed that spas wouldn’t purchase the product if some of it came in a different color than the green.”

While the display farm is organic, it is just that: for display and not a working farm. “A working farm is not safe for the public,” said Koronczay. “There are no safe paths, and it contains potentially dangerous equipment and tools.”

Taking three years to complete, Éminence Certified Organic Farm was designed for visitors with pleasant, cobblestone pathways that are handicap accessible and working facilities. It’s a place for schoolchildren to visit, a place for people to picnic and where young couples can go for wedding photos.

“I’m happy that the farm will be part of people’s lives…be part of their education,” added Koronczay.

The Next Adventures for Éminence

What’s next for Éminence? According to Koronczay, it’s expanding into more countries. So far their products are in 32 countries.

“Asia is growing more,” he added. “We’re seeing the popularity of hyperpigmentation and brightening skin care grow there.”

Éminence’s products are making their way more in medical spas, which is one of their fastest-growing segments. Koronczay said, “While clients receive treatments like a chemical peel, our products are used to heal.”

No matter what area of the globe they grow or a segment they increase, “Éminence will continue to stay true to its roots,” he said.