Cool Your Way to Wellness 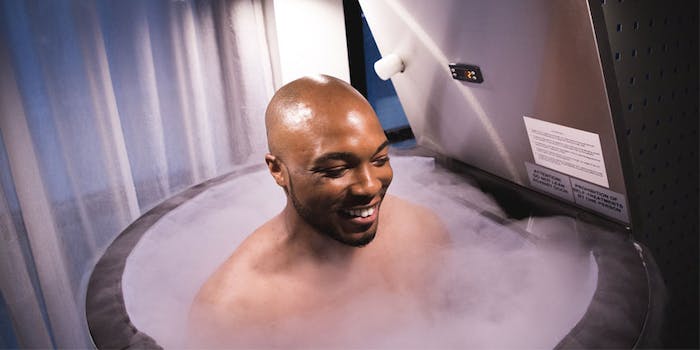 Cryotherapy is based on the principle that cold helps improve inflammatory properties in the blood. According to Kathryn Butters, founder of CryoVigor, a New York City-based cryotherapy clinic, the treatment is used by both athletes and wellness professionals alike to combat stress and aid in recovery.

“We know inflammation causes pain in our body whether from arthritis or exercise,” Butters said, citing the recent surge in anti-inflammatory wellness practices, such as the anti-inflammatory diet. “When we rid our bodies of inflammation, we not only eliminate pain in our body, but we also stop the damage that may be occurring at a cellular level.”

Butters noted that there have been studies linking inflammation and some health conditions, such as heart disease, Alzheimer’s and even cancer. However, the Food & Drug Administration (FDA) warns that no whole-body cryotherapy device has been cleared or approved by the FDA for treatment of inflammation, and recommends consumers get clearance from their doctor prior to undergoing any cryotherapy treatment.

Whole-body cryotherapy consists of having a patient enter a cryosauna, or stand-up chamber, which cools to -200°F to -240°F via vaporized nitrogen. Patients remain in the cooled chamber for up to three minutes.

“After the treatment, vasodilation takes place and the newly enriched oxygenated blood flows throughout the body,” explained Butters. “Your body warms up immediately and you get a sense of euphoria from the endorphin release. Your body will feel loose, any pain diminished, you’ll have higher energy, skin will feel tight and usually follows with a good night’s sleep.”

As with most treatments, patients should consult with their doctor prior to beginning a whole-body cryotherapy session. Additionally, patients who have abnormal blood pressure are not candidates for cryotherapy, as vasoconstriction occurs during three-minute treatments, which can cause the systolic heart rate to increase 5–10 points. CryoVigor patients have their blood pressure taken prior to every session, and all contraindications are explained, noted Butters.

Cryotherapy and Your Med Spa

“It’s important to have a staff that understands not only how to administer a cryotherapy session, but also what happens to the body during the three minutes,” said Butters. “Our staff also know the risks as safety of the clientele is first and foremost.”

While cryosaunas can be added to an existing medical spa, Butters noted that significant space is needed for the nitrogen chambers, so it is not an easy addition for small spaces, such as those in New York. However, adding the service is doable if a spa has space to spare or is still in the construction phase.