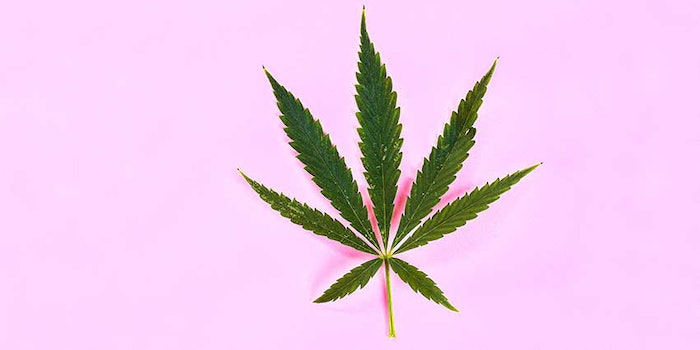 Cannabis is in vogue at the moment—as regulations on the substance gradually lighten, more research and products tout its benefits for skin care. Along with skin-soothing properties, there is reason to believe that cannabinoids can effectively treat psoriasis and atopic dermatitis.

Inflammation relief is the most promising avenue for cannabinoids in skin care, along with the treatment of itch and burns, according to the Robert Dellavalle, M.D., Ph.D. His study, “The role of cannaboids in dermatology,” published in the Journal of the American Academy of Dermatology, explored current literature on the drug’s effect on skin. However, Dellaville noted that more research needs to be done to determine how cannabinoids interact with receptors in the skin.

Several skin care brands have cropped up in dispensaries. Notably, Whoopi Goldberg entered the budding industry with her Whoopi & Maya line in early 2017. Per the brand’s website, its offerings are formulated to provide relief to women suffering from menstrual discomfort, and its body balm and bath soak formulations soothe the skin.

Mary’s Medicinals is another such brand. The Colorado-based company manufactures cannabis products, including transdermal patches and a topical compound to be applied to the skin for inflammation, soreness and pain relief.

Jeremy Riggle, Ph.D., chief operating scientist for Mary’s Medicinals, weighed in with exclusive insight on how cannabis affects the skin.

What limitations exist on brands producing skin care containing cannabinoids due to the regulatory nature of cannabis?

Jeremy Riggle (JR): This is a tricky question and is going to vary from state to state as regulators, legislators and public health officials determine their own limits on the amount of cannabinoids allowed in skin products. Obviously, the classification of cannabinoids as schedule 1 drugs greatly constrain their use in all products, not just skin products. It will be interesting to see how these laws evolve especially as more and more clinical evidence becomes available.

"Topically-applied cannabinoids do not cross the stratum corneum, so people who use them topically don't run the risk of getting high."—Riggle

How does cannabis affect the skin compared to other active ingredients?

JR: The interesting thing about the skin is that it expresses the endocannabinoid system (eCS). What I mean by this is that virtually all skin cell populations (epidermal keratinocytes, cutaneous nerve fibers, dermal cells, etc.) express both CB1 and CB2 receptors as well as the enzymes of the eCS. Phytocannabinoids also interact with transient receptor potential ion channels as well as other receptor systems.

When phytocannabinoids are applied to the skin they interact with CB1 and CB2 receptors, among others, to reduce pain and inflammation following irritation, they contribute to epidermal cellular differentiation (help skin cells become the type of cells that are needed for optimal skin health), they mitigate psoriasis, dermatitis, acne (phytocannabinoids are antibacterial, antiproliferative, and anti-inflammatory) and have been found to reduce growth of melanomas and carcinomas. There is still a lot to discover regarding phytocannabinoids and skin but the pre-clinical data is very promising.

What do you see in the future for cannabis in topical products and skin care?

JR: I see a very bright future for cannabis in skin products (assuming regulations don't completely eliminate the use of cannabis in skin products) and overall skin care. In addition to the eCS receptors in skin cells mentioned above and their associated effects, cannabinoids also absorb UV radiation offering some protection against the sun's damaging UV rays. Phytocannabinoids are also precursors to prevalent skin molecules, so they can indirectly contribute to the structure of the skin.

Is there anything else you believe skin care professionals should know about cannabis as an ingredient?

JR: I would say that topically-applied cannabinoids do not cross the stratum corneum, so people who use them topically don't run the risk of getting high. I would also say that cannabinoids are extremely non-toxic and a safer alternative to some of the chemicals that make their way into skin products.