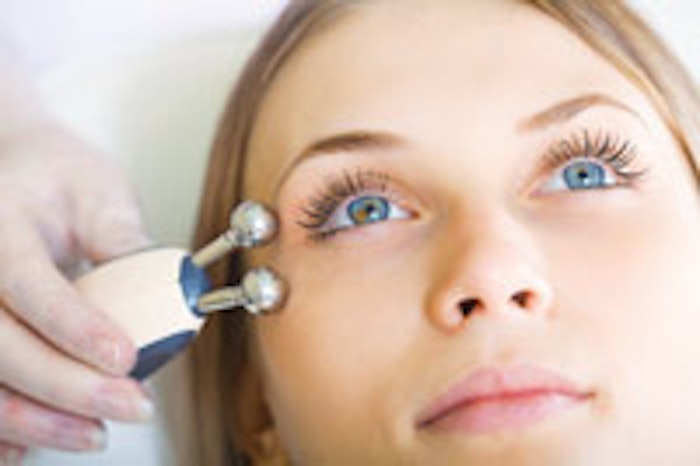 Skin-tightening is one of the most sought-after treatments today. Many methods for skin-tightening have been developed throughout the years. Past treatments include ablative resurfacing with dermabrasion and fractioned carbon dioxide (CO2) lasers used to remove skin down to the reticular layer of the dermis to elicit a wound response. On the other end of the spectrum, products claiming to be “face lifts in a bottle,” or even facial massage techniques claiming to give the same results as surgery have been heavily marketed. As technology evolves, devices used for skin-tightening are constantly being developed, each trying to out-do the others. The following article will discuss why skin-tightening is desired, what devices are most popular and how to implement them.

The push for skin-tightening treatments

According to the American Society for Aesthetic Plastic Surgery’s website, www.surgery.org, a total of 2,105,926 people requested skin-rejuvenation procedures in 2012, and 283,741 of those were for noninvasive skin-tightening. As gravity accumulates and subcutaneous fat is lost, the skin begins to sag—especially in the jowls, as well as the neck and eye areas. This sagging can be exacerbated by external aging factors, including excess sun exposure and unhealthy lifestyles. In the past, surgery—including rhytidectomy and blepharoplasty—was the best known option when it came to tightening skin, but that is not the case anymore.

Fractional devices. One of the most exciting breakthroughs in facial rejuvenation treatments during the past two decades is the advent of fractional devices. These devices range from the use of light energy to the use of needles for mechanical breakdown. The idea behind treating portions of the skin is to leave support skin for the growth of new, healthy tissue and allow for a quicker healing time, along with improved results.

Fractional lasers. The first fractional laser was introduced in 2004 and many others soon followed. Fractional lasers use energy to either heat nonablative or remove ablative portions of skin with a beam of light through a difractionated microlens. Traditional lasers used for resurfacing produced great results, but left clients with 6–8 weeks of downtime and a heightened chance of side effects. The ability to leave small portions of intact skin behind results in rapid re-epithelialization, fewer complications and more consistent results.

There are countless methods of laser resurfacing used today; some have longer wavelengths and more energy to remove portions of skin down to the dermis, while others use shorter wavelengths to simply heat portions of the epidermis. Each technology has its own unique properties, including the size and shape of the microthermal zones created, as well as differing treatment protocols. Fractional lasers, in general, have proven effects on skin-tightening, as well as skin rejuvenation as a whole.

Light-emitting diodes (LED). LED, referred to as light therapy, produces low levels of light energy. Light essentially provides warmth and is responsible for photosynthesis, needed for plant life. LED devices utilize light to generate a similar type of energy necessary for the repair and regeneration of human cells. Although LED uses light, it provides significantly less energy than lasers or intense pulsed light (IPL), and does not produce a measurable amount of heat. The limited thermal effect makes it safer for use in nonmedical treatment settings and also for clients’ at-home use. The most common uses for LED include acne-reduction, controlling inflammation, increasing skin circulation and stimulating collagen production in the skin. The stimulation of collagen production caused by light therapy will help tighten the skin throughout time.

Micro-focused ultrasound. The use of micro-focused ultrasound was introduced in 2009 to deliver heat to deep, subdermal connective tissue in focused zones. The treatment is U.S. Food and Drug Administration (FDA)-approved to lift the skin on the neck, chin and brow. The mechanical energy produced from the sound waves bypass the epidermis and papillary layer of the dermis, producing small microthermal lesions deep in the reticular layer of the dermis and the hypodermis. Another unique feature of micro-focused ultrasound is that it uses the imaging benefits of ultrasound technology to ensure correct focal points in each client. Therefore, the skin care professional can see precisely where the energy will be positioned. This treatment has made its mark in the skin-tightening world rather quickly. The downside is that many experience pain throughout the procedure.

Microcurrent. Microcurrent uses low-level electrotherapy to help tone the muscles in the skin, as well as increase circulation to help achieve a more youthful appearance. Throughout the human body, there are naturally occurring electric currents that aid in repair and regeneration. These currents can essentially turn on a process in the body—similar to the way electricity in general can turn on a light or radio. Microcurrent mimics a very low level of electrical energy to stimulate the body’s tissues for rejuvenation, healing or repair. The electric current works on adenosine triphosphate (ATP) to stimulate cellular activity. ATP is the basic source of energy that is synthesized from nutrients through the process of cellular respiration. Biological processes—including tissue repair, and collagen and elastin synthesis—are dependent on ATP. Microcurrent also uses this energy to stimulate muscles in a specific pattern. The idea is to retrain the muscles while strengthening them with repeated treatments. Cumulative services are needed to see lasting results, but results for skin-tightening are often seen.

Microneedling. The premise of microneedling is similar to that of other methods aimed at skin rejuvenation—triggering a wound response by targeting specific portions of the skin. The origin of skin needling was in 1995, when Norman Orentreich, MD, showed great improvement in depressed scars using single 18–20 gauge needles. Years after, the first dermal roller was released to the public, followed today by automated microneedling devices. As the roller showed great improvement in the appearance of the skin, companies have found ways to make the treatment safer and more effective.

Automated microneedling is aimed at providing the user with more consistent needling, using vertical insertion to reduce the risk of tears in the skin. Microneedling devices have other benefits, as well—ease of use with an ergonomically comfortable device, and the ability to alter the needle depth during the treatment. Needle depths typically range from 0.25 mm, which only affects the epidermis, to 2.5 mm, which can reach the reticular dermis. The gauge or width of the needle is another important factor; most commonly 30–34 gauges are used—the larger the gauge, the more narrow the needle. Additionally, the amount of punctures per square centimeter (cm2) can make the treatment more conservative or aggressive. This can also be altered by the number of passes, as well as the speed of specific automated devices.

These skin-tightening devices are considered a medical treatment, as they are meant to structurally change the proteins in the skin. It is imperative to abide by individual state regulations for each type of device used.

Radio frequency (RF). RF devices emit energy in the form of electromagnetic waves that convert to heat. These waves heat the dermis to stimulate collagen production, resulting in skin-tightening. The function of RF is to deliver just enough energy to create a wound-healing response without creating a wound. The heat denatures damaged proteins and promotes collagen remodeling. RF energy is delivered to heat the water content of skin to the ideal temperature, which is between 104–115° F, depending on specific protocols.

RF energy devices are commonly used in esthetic medical practices for skin-tightening and, more recently, fat-reduction. There are several RF devices that differ according to the amount of energy delivered and the methods used to deliver it. Some manufacturers use RF energy in combination with other modalities, including light, to increase its effects.

Ultrasound. Ultrasound is most commonly associated with monitoring fetuses during pregnancy, but it is widely used in medicine to diagnose underlying medical conditions, and in physical therapy for musculoskeletal ailments. Ultrasound technologies use high-frequency sound waves of at least 20,000 hertz (Hz) for therapeutic or imaging purposes, which cannot be heard by humans. The use of ultrasound for skin rejuvenation was founded due to its widespread use for stimulating wound-repair in poorly healing skin. Specifically, research has shown that the treatment can stimulate fibroblast proliferation and increase circulation at the wound, thereby increasing the speed at which the wound heals.1 This makes it ideal for skin rejuvenation.

The physiological benefits of ultrasound are categorized as thermal and nonthermal. Thermally, ultrasound waves can cause local tissues to heat up to 104–113° F, which, like RF, seems to be the optimal temperature range for stimulating collagen production. Ultrasound also increases localized blood flow, allowing skin to better repair itself.2 The increase in blood flow allows more nutrients to be circulated, and heightens stimulation of the lymphatic system to begin engulfing and removing impurities.

The nonthermal nature of ultrasound acts to create caviatation, or microscopic bubbles, through the vibrations produced from sound waves.

Skin-tightening and the skin care industry

The influx of medical devices has subsequently triggered a rise in the use of spa and at-home treatment devices. Although such treatments typically emit less energy, they still have the potential to improve select skin conditions and maintain results from previously mentioned cosmetic medical treatments. In all of these cases, clients must be properly educated about pros and cons of each. For example, some devices, such as LED and microcurrent, take several treatments before results will be apparent. Others that show quicker results, such as ablative laser, may not last as long or could cause pain—such as micro-focused ultrasound. Because all of these devices differ, it is important for skin care professionals to choose modalities carefully. Regardless of the devices chosen, it is necessary to have a good understanding of how other modalities work for comparison. In the case of a skin care professional who is not working in a medical esthetic setting, it is equally as important to be familiar with these devices, because it opens up the opportunity to offer complimentary skin care treatments for clients who have undergone medical esthetic treatments.

As always, Skin Inc. magazine recommends that skin care professionals obtain the proper training before offering any new treatments in their skin care facility. Also, check with your state’s cosmetology board to make sure any new treatment you want to perform is within your scope of practice. Contact information for these boards can be accessed at www.SkinInc.com/education/statelicensing.

Terri A. Wojak licensed esthetician with 20 years of experience, is a respected authority on skin care in a medical setting, education and business development. She is the director, as well as an educator, at True U Esthetics in Chicago, and the co-author of Mastering Medical Esthetics (True, 2009) and author of Aesthetics Exposed: Mastering Skin Care In A Medical Setting and Beyond (Alluredbooks, 2014). She is a member of the 2014–2015 Skin Inc. Editorial Advisory Board.