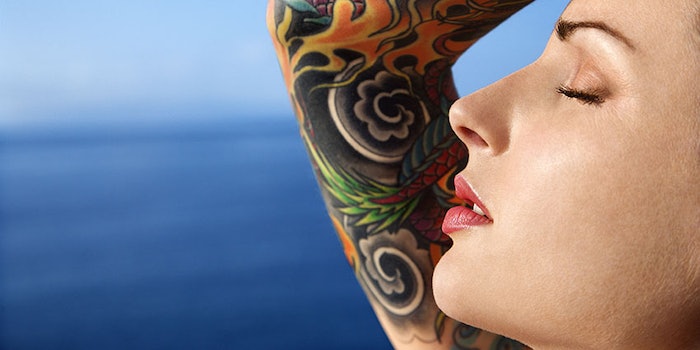 A patch application is cutting down tattoo-removal risk and procedure time—use of a clear silicone patch placed on tattooed skin during standard laser removal procedures was found to eliminate epidermal whitening and allow more laser passes per session, according to a recent study in Lasers in Surgery and Medicine.

The research found that tattoos treated through the perfluorodecalin (PFD)-patch can sustain almost triple the amount of laser passes, since clinicians did not need to wait the typical 20 minutes for whitening to subside. The whitening is opaque, and occurs when gas bubbles form after the laser meets the ink and creates cavitation effects.

Because of this time restraint, most traditional removal treatments are reserved for 80 minutes and can take up to 20 sessions—according to the study, heavily-inked tattoos can require up to 20 sessions to be fully removed.

“This time savings may be meaningful to patients and is also expected to translate into increased practice efficacy for the provider,” noted study authors Brian Biesman, M.D., FACS, and Cara Costner, RN, FNP.

The study tested the patch technique on 30 participants with predominately dark blue or black tattoos. Each tattoo was split in half, with one half treated conventionally and the other through the patch during a five-minute period. The side treated with the laser alone could only sustain 1.4 passes in the time, as opposed to the 3.7 passes possible on the patched side. Participants also reported less pain on the treated side.

The study did not test any individuals with darker Fitzpatrick skin types, but did find that potential tissue splatter and laser plume (containing harmful pathogenic agents and chemicals) are prevented with the patch. However, patients were not blinded and were offered lidocaine during the procedures, which can compromise pain-level data.

The patch itself was cleared by the U.S. Food and Drug Administration (FDA) in 2015.