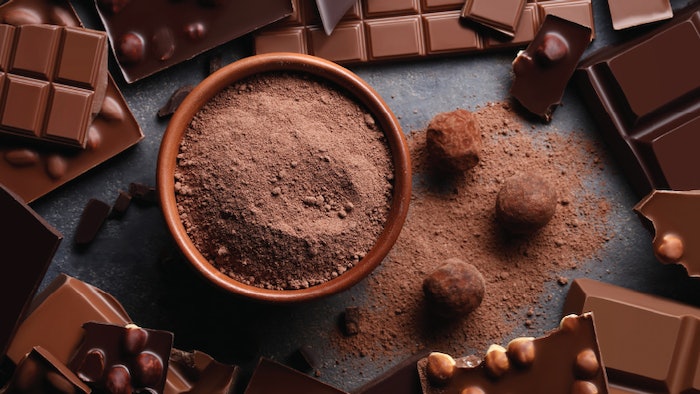 We are in the full swing of winter, when the mention of chocolate conjures visions of a warming cup of cocoa on a cold day, fresh-baked cookies at grandma’s or a sweet treat for a loved one on Valentine’s Day. Of course, do we really need a reason to talk about chocolate?

It is well-known that the history of chocolate and its predecessor, cacao, can be traced to the ancient Mayans—but even earlier, to the ancient Olmec civilization (approx. 1,600-400 B.C.E.) of southern Mexico. According to History.com, it is unclear how cacao was first discovered, but ancient Olmec pots and vessels from around 1,500 B.C.E. were found containing traces of theobromine, the stimulant in chocolate and tea.1

It is believed that cacao was used by the Olmecs for ceremonial drinks. Although there is no recorded history of this, the knowledge of cacao was apparently passed down to the Mayans (approx. 900 B.C.E. to 1,500 A.D.), who revered it and wrote about its use for celebrations.1 The beverage was prepared by grinding fermented and shelled cacao seeds into a paste, mixing this with a corn “gruel” and water, and beating this mixture until foamy.2 The resulting thick and frothy beverage often was combined with chili peppers, water or honey—not as a sweetener, but to ferment the cacao.1, 3

Much later, the Aztecs (approx. 1,300-1,521 A.D.) cherished cacao as a gift from the gods. They used it for currency; in fact, cacao beans were considered more valuable than gold. In Aztec culture, chocolate or xocolatl was reserved for the upper class whereas in Mayan culture, it was consumed by nearly everyone with daily meals. By the 1500s, traders brought chocolate to Spain, from which its popularity spread across Europe, giving rise to newer, often sweeter recipes.1

The Theobroma cacao tree, from which cacao seeds are derived, is native to the Amazon rainforest. As stated, the seeds are typically dried and fermented, from which cocoa solids and cocoa butter can be derived.

Traditionally, cacao was used as a sacred food, in social relations and as a sign of prestige.3 The Aztec ruler, Montezuma II, allegedly drank gallons of the beverage for energy and as an aphrodiasiac.1, 3

The Spanish explorer Hernández reported that since cacao bean had cold and dry qualities, chocolate should be recommended to treat hot diseases such as fevers. He also reported native uses for cacao including to treat liver disorders and dysentery, and again, in aphrodisiac concoctions.4

Beyond religious uses and folklore, however, the health benefits of cacao were long debated. Reports emerged of its ability to cure “hypochondriac melancholy,” as well as to help patients gain weight, stimulate the nervous system and improve digestion. Additional uses were as an expectorant and diuretic, among others.4

In the late 1900s, the benefits of chocolate focused on its richness in carbohydrates, fat and phytonutrient flavonoids4. Like many natural extracts, cocoa contains phytochemicals including epicatechin, procyanidins and other flavonoids, as well as the aforementioned theobromine, which gives cacao a bitter taste.5 Such constituents support the reported benefits of dark chocolate for cardiovascular diseases, gastrointestinal and respiratory disorders, and mental health as well as antioxidant and anti-inflammatory properties.

Read more about the skin benefits of chocolate in January's Digital Magazine...