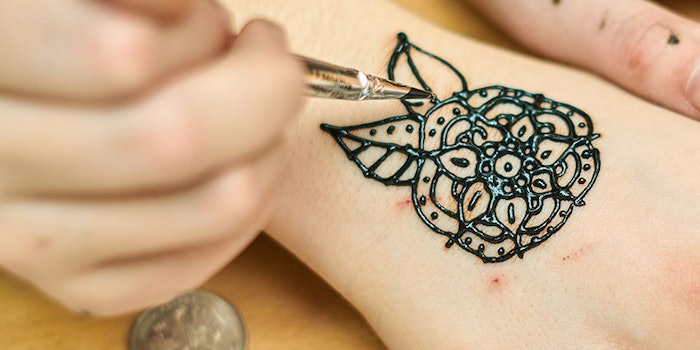 Skin reactions from black henna temporary tattoos (BHTT) are on the rise, according to data from the Skin Health Alliance. The group's recent 2017 Dermatologist Survey found that 72% of the 288 participating dermatologists experienced a rise in patients with adverse reactions to BHTTs.

The culprit behind reactions from the body art is the ingredient para-phenylenediamine (PPD), used in coal-tar hair dye that effectively blackens henna. PPD can leave behind blisters and burns to the skin that can scar, along with a sensitivity to the ingredient that could flare up after future use of hair dye.

"Black henna is well known to cause skin reactions and should be treated with caution, particularly in children. ... What might seem like pretty body art can quickly turn nasty with horrific blistering, permanent scars and even in the most severe cases life-threatening allergic reactions," said Anjali Mahto, consultant dermatologist and spokesperson, British Skin Foundation.

In the U.S., henna is only approved for use as a hair dye due to the U.S. Food & Drug Administration's (FDA) regulations on color additives. In particular, PPD is not permitted for use in cosmetics to be applied to the skin in the U.S. or the European Union.

Although the FDA's Fair Packaging and Labeling Act requires retail cosmetics to have ingredients listed on the label in order to be introduced into interstate commerce, these requirements do not apply to samples, or products used only by professionals—thus allowing potentially unlabeled henna products to be used for temporary tattoo applications in salons.

For more on henna tattoos and the skin, head to news-medical.net (source).