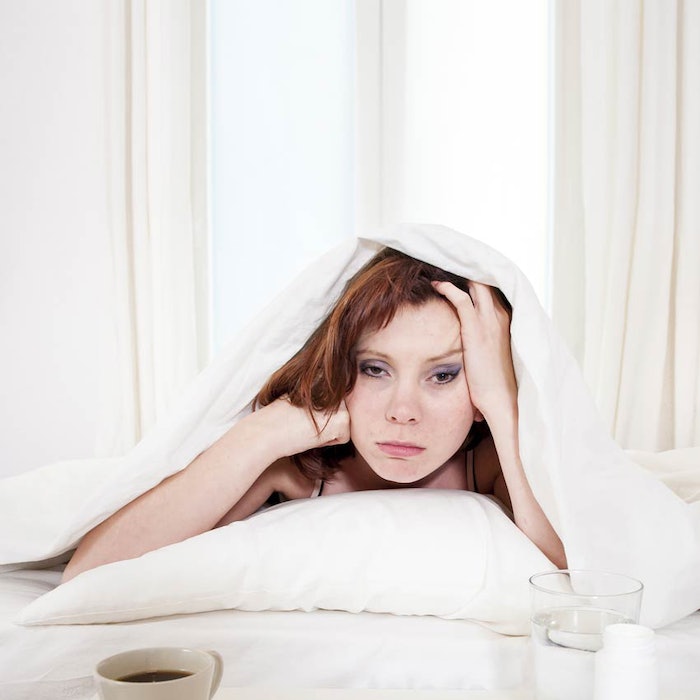 By now, there’s a good chance you’ve survived a hangover. We’ve long surpassed Spring Break and are already knee-deep into summer—a season we celebrate with margaritas on the beach and beers around the campfire. While overindulging in “adult beverages” can make our heads pound and stomachs implode, perhaps less obvious are the toxic effects that seep into our skin. This article reviews the causes of hangovers, their impact on skin and what hope there is to “cure” them.

According to Smithsonian.com,1 scientists have a few theories about what causes hangovers, known medically as veisalgia. The most well-known is that drinking alcohol dehydrates you. It does so both by acting as a diuretic, increasing urine production, and, according to dermatologist Whitney Bowe, M.D., 2 by decreasing the body’s levels of vasopressin, an anti-diuretic hormone. So essentially, it’s a double-edged sword; not only does drinking alcohol force water from the body, it prevents the body from re-absorbing it. Bowe added, “[A]nd we all know what dehydrated skin looks like: tired and sallow, with more pronounced fine lines, wrinkles and pores.”

But scientists are not convinced dehydration is the only culprit. Mainly because they’ve looked for connections between dehydration-related hormones and hangover symptoms, and haven’t found any. Another theory is that alcohol consumption prevents the body from processing an energy-producing enzyme known as nicotinamide adenine dinucleotide (NAD+). Its buildup ultimately prevents cells from performing metabolic activities such as absorbing glucose from the blood and regulating electrolyte levels. But once again, science was stumped when examining individuals with severe hangovers did not reveal lowered levels of electrolytes or glucose in their blood. Something else must be the cause.

Currently, the most accepted explanation for hangovers appears to be a buildup of the chemical acetaldehyde. As Scientific American explained, 3 after a person starts consuming an alcoholic drink, the liver begins its work using an enzyme called alcohol dehydrogenase (ADH). ADH metabolizes the ethanol in alcoholic drinks into acetaldehyde, which is reportedly 10 to 30 times more toxic than the alcohol itself.1

From there, another liver enzyme, aldehyde dehydrogenase (ALDH), metabolizes the acetaldehyde into acetate. This is a less toxic compound that breaks down into water and carbon dioxide. Obviously, the whole process takes time, so until it’s metabolized, acetaldehyde has been shown to cause symptoms such as sweating, skin flushing, nausea, vomiting and more.1, 2 Not exactly a picture of health.

Research from the Netherlands4 also acknowledges acetaldehyde buildup but in addition, has proposed there is a more significant relationship between immune factors and hangover severity—i.e., the body reacting as if literally “fighting off” the alcohol. These researchers showed that inhibiting the production of prostaglandin, which activates inflammation, pain and fever, actually reduced hangover severity. Additional research will be conducted but maybe they’re on to something.

Much more serious than a hangover is skin cancer, and new research5 suggests consistently drinking alcohol could elevate the risk of cutaneous squamous cell carcinoma (cSCC), the second most common form of skin cancer. Specifically, on average, 12.8 g of alcohol per day was associated with a 22% increased risk of cSCC. Of course, once you’ve survived that nasty hangover, you’ll “never drink again,” anyways, right?

A note about headaches. While it’s okay to ease them by taking a pill or two, depending on the dosage, with hangovers, it’s best stick to nonsteroidal anti-inflammatory drugs (NSAIDs) including aspirin, ibuprofen and naproxen—not acetaminophen. According to Dena Davidson, Ph.D., former associate professor of psychiatry at Indiana University School of Medicine, "While it's okay for a headache, when combined with a liver that's working overtime to metabolize alcohol, it can cause liver damage or be deadly.”6

Aside from dehydration and toxic buildup, according to Bowe,2 too much alcohol consumption depletes levels of vitamin A in the body. This antioxidant aids in cell renewal and turnover, which keeps skin healthy and younger-looking. It also fights free radicals, so removing this defense makes skin’s moisture- rich lipid layer vulnerable to free radical damage. Furthermore, alcohol dilates the blood vessels, causing a rush of blood that flushes the skin and flares up rosacea—or worse, breaks blood vessels, which can cause permanent spider veins on the face.2 Dilated blood vessels are partly what’s behind that puffy hangover complexion. In relation, mixed drinks often contain large amounts of salt and sugar, and as we all know salt retains water, which can lead to bloating and under-eye bags.

Furthermore, according to Bowe,2 sugar has been shown to trigger the hormone IGF-1, which causes an over-production of oil in the skin, also leading to inflammation.

After the Damage is Done

There are a multitude of home and Rx remedies to help alleviate a hangover—too many to review here. Instead, we’ll focus on what a skin care professional can do with a client who has partied-out skin.

1. Rehydrate, rehydrate, rehydrate. Replenishing the fluids lost will return most of skin’s functions to normal, as long as they stop drinking alcohol. According to Bowe,2 by drinking water, skin tone and clarity will return, and fine lines and pores will appear smaller. In addition, applying moisturizer will improve the skin’s dried out appearance.

“What about green tea?” you may be wondering. It’s true, drinking green tea was previously recommended as a hangover cure. But in 2013, Chinese researchers from Sun Yat-sen University in China published a study7 showing that although green teas are rich in antioxidants, they prohibit the metabolism of alcohol. The researchers therefore recommended to not drink tea products during or after excessive alcohol consumption.

However, four beverages increased ADH and ALDH activity and helped to metabolize the toxins more quickly. A product called Xue bi, which is similar to Sprite and 7-Up, showed the greatest increase in ALDH activity and acetaldehyde breakdown most likely due to its taurine content. Thus, this work pointed toward soft drinks containing taurine as an optimal hangover cure.7

2. Revive color. Exfoliating the skin will remove the dry, dead cells on the surface that make it look dull. In addition, the scrubbing action itself will bring blood to the surface of the skin, improving circulation and the complexion. Since dehydrated skin looks dull, dry and grey, adding a tinted moisturizer, blush, bronzers or even self-tanners can also improve its color.

3. Depuff and clarify eyes. According to the Huffington Post,8 before crashing for the night, propping the head up on an extra pillow can help to drain excess fluid and reduce puffiness. Also, hot water should not be used on hungover clients during a treatment. Lukewarm water should be used instead because high temperatures increase puffiness. Then there’s the bloodshot factor, which can easily be addressed using eye drops.

In addition, placing a black tea bag on eyes can help to reduce under-eye circles and puffiness. This is due to the caffeine content, which constricts blood vessels, thereby restricting blood flow and reducing swelling. It is also a diuretic and draws water away from puffy cells.

Lastly, tinted eye cream can disguise dark circles. Products containing light-diffusing particles tend to disguise shadows best. These should be applied using a gentle patting motion, so as not to irritate the delicate under-eye skin.

Alcohol can do a number on the body, including the skin, so advise clients to try to limit the number of alcoholic beverages they consume. We are now more aware of the repercussions and better equipped with a few beauty tricks up our sleeve. A few additional approaches to saving your skin and body from hangovers include choosing your “adult beverages” more wisely. For example, experts have suggested2 straight vodka over dark liquors, and red wine—which contains the antioxidant resveratrol. Furthermore, eating during drinking will help slow the release of sugar. In addition, alternating water with alcohol can lessen a hangover and keep the body more hydrated. Of course, in the end, the best cure for a hangover is to avoid drinking alcohol altogether.