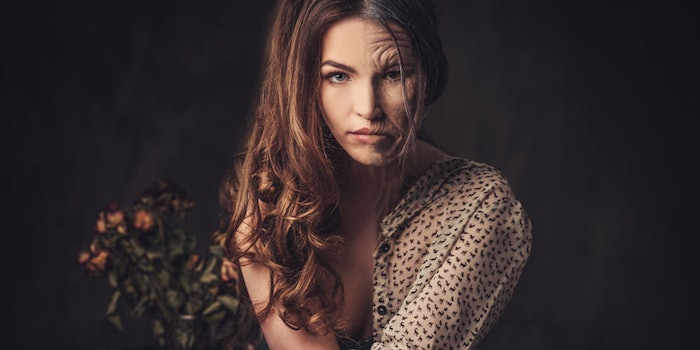 Glycation is when sugar molecules attack the body's essential proteins, and it has been long regarded as a major cause of aging. We know that glucose-based cross linking degrades proteins and creates advanced-glycation end products (AGEs), which are, in turn, responsible for leading to many age-related illnesses like cardiovascular disease, diabetes, cancer, blindness, deafness and Alzheimer's.

With regards to the skin, glycation is believed to be the main culprit behind deep wrinkling,  age spots and skin thinning. The human body does not recognize AGEs as normal and will produce antibodies that cause inflammation in the skin. Once formed, AGEs tend to gravitate towards the skin’s collagen and elastin. This article will dive into AGEs and the impact it has on the skin.

Aging is defined as the progressive accumulation of damage over time, leading to disturbed function on the cellular, tissue and organ levels. It is a complex, multifactorial process where genetic, endogenous and environmental factors play a role.1 Young skin is supple and smooth, while aging skin has noticeable differences in moisture content, fine and deep lines and the thinning of the epidermis. One of the important and more visible aspects of older skin is the color and texture difference, due to desquamation becoming irregular.

Skin is a composite tissue, consisting of a fibrous matrix containing elastin and collagen. Collagen provides strength to the skin structure and elastin provides the snap or resiliency. When the elastin fibers undergo changes that cause them to lose their resiliency, the skin no longer is able to return to its original state. As a result, sagging and crinkling occur in a pattern that results in wrinkles.

Skin is the largest barrier between our bodies and the environment. As such, skin is subjected not only to the internal aging process but also to various external stressors, leading to structural changes and affecting the skin’s youthful appearance and various physiological functions.2 Aged skin shows a decrease in skin permeability, blood vessel development, lipid and sweat production, immune function and Vitamin D synthesis.2 This can manifest in impaired wound healing, atrophy, vulnerability to external stimuli and development of benign and malignant diseases.

The Theory of AGEs

A number of theories have been introduced to explain the aging process. In fact, more than 300 theories of aging have been proposed.3 In recent years, the role of AGEs has been increasingly discussed in skin aging. One theory is that the abnormal accumulation of biological waste products in the organism is responsible for organ or tissues degradation.4,5

If there is too much sugar in the body, protein molecules can cross-link with sugar molecules created AGEs. Since its first description in 1912 and involvement in diseases and problems related to the body, including aging and diabetes, AGEs has been an intensive field of research. The more sugar you eat, whether processed or natural, the more AGEs are produced. As people age, proteins in the body can become damaged through the introduction of AGEs. When the body is overwhelmed with AGEs, collagen becomes compromised.

AGEs on a Cellular Level

Effects of the glycation process at the cellular level of the skin’s structure may result in wrinkling, loss of elasticity, stiffness, accelerated aging and compromised barrier function.  Other conditions that appear when microcirculation is damaged and cell turnover slows is a loss of volume in the face due to redistribution of fat.

The external signs of glycation appear between the ages of 30 to 35. Collagen and elastin are both the skin proteins most prone to glycation and the ones responsible for a youthful complexion. Glycation causes both proteins to become stiff, malformed, deflated, inelastic, weak and discolored. Eventually the effect shows up on the skin as wrinkles, dullness and weakened barrier function.

The amount of AGEs present increases in certain situations involving hyperglycemia and oxidative stress, such as diabetes.​ Diabetics have an especially difficult time with glycated sensitive skin issues, including neuropathy and scleroderma.

Intake forms are extremely valuable when dealing with health-challenged skin. Questions about other health challenges can be added in order to potentially determine why glycation issues can vary, especially if diabetes or other conditions are in the picture.

AGE formation within the body is increased in diabetes; however, AGEs are also formed at lower rates by normal metabolic processes in the body.6 Environmental factors, such as diet and smoking influence the rate of AGE formation.7 Levels of circulating AGEs have been hypothesized as being genetically determined.

AGEs can not only be damaging because of their properties, but through their interaction with specific receptors. Receptors for AGEs (RAGE) are a member of the immunoglobulin family of cell surface receptors which are encoded by a gene. In the skin, RAGE expression was observed in both epidermis and dermis, and it was increased in sun UV irradiation exposed areas as opposed to protected areas of the skin. Keratinocytes, fibroblasts, dendritic cells and, to a lesser extent, endothelial cells and lymphocytes express RAGE.8

Proteins, lipids and nucleic acids can be targets of advanced glycation which can interfere with many functions within the skin. AGEs are also reactive molecules which can result in inflammation, immune responses, hyper cell proliferation and genetic effects. AGEs are formed intracellularly, reacting with proteins, lipids and nucleic acids in almost all skin cells as well as on extracellular proteins. Through alteration of the chemical properties of dermal proteins, decreased cell proliferation, increased damage to cells and increase in oxidative stress and inflammation responses, AGEs contribute to the appearance of skin aging.

It has been determined that collagen types I and IV and other long-lived proteins can be affected by glycation while undergoing intrinsic chronological aging, and that this can manifest in signs of aging as early as 20. This damage is said to accumulate in a yearly rate of approximately 3.7%, but increasing to damage that account for 30% to 50%  of signs of aging in individuals 80 years and older.10,11,12

Collagen is not only used to support cells and tissues but also effects cellular function, including elastin and fibronectin, with fibroblasts and keratinocytes affected by AGEs as well.13,14 Because of this, glycation can affect collagen, which can lead to skin experiencing increased stiffness in skin cells, decreased elasticity, compromised barrier and impaired skin cell turnover.

AGEing in the Sun

AGEs also accumulate in extrinsically photo-aged skin. Until now, the damaging effects of UV light were attributed to inflammation and free radical activity, among other actions of UV light. However, even in younger clients and areas of the skin normally sun-protected, AGE damage was observed in including oxidative damage. 2,21

While there are numerous studies on dietary interventions to prevent AGE, studies on AGEs-fighting ingredients are still in their early stages. Maintaining a strong skin barrier can help curtail the appearance of skin aging. Since oxidation steps are crucially involved in formation of many AGEs, substances with antioxidant properties may inhibit glycation. These ingredients include:

Oxidized Glutathione. A molecule found naturally within the skin that plays an important role in preventing oxidative damage. This ingredient has been found to help lessen the appearance of dark spots and hyperpigmentation.

Diglucosyl Gallic Acid (DGA). More potent than vitamin C and Kojic Acid, this ingredient is known to help restore a more perfect-looking complexion while it helps even skin tone.

Tocopherol vitamins E. A natural antioxidant, valued for its soothing and regenerating properties.

Niacinamide/vitamin B3. Niacinamide inhibits protein glycation effectively reducing deposition of cross-linked collagen and elastin molecules in the skin. Skin sallowness seen in actinically damaged skin is believed to be a result of glycated cross-linked, yellow-brown proteins that accumulate in the skin after sun exposure.22

Matcha green tea. Matcha is the purest form of green tea. Unlike most green teas, matcha is shade grown and ground into a fine powder, containing the entire leaf of the Camellia sinensis, giving it the highest concentration of antioxidants, including EGCG (epigallocatechin gallate).23

Blueberry extract. Blueberry extract was tested for 12 weeks in female diabetic subjects. This treatment resulted in significant improvement of skin firmness, wrinkles and hydration although it failed to show a significant decrease in the cutaneous content of AGEs.24

Quercetin. Quercetin is a powerful antioxidant, reported to be more potent than ascorbic acid and tocopherol.

Rutin. A natural citrus bioflavonoid, this ingredient is extracted from the dry buds of the Japanese pagoda tree.

Laminaria Digitata and Ascophyllum Nodosum seaweed. These particular seaweeds are a source of many important nutrients, including polyunsaturated fatty acids, enzymes and bioactive peptides. Essential fatty acids help maintain the skin’s barrier, and polysaccharides such as Alginic Acid, help to lock moisture into our skin. Among marine resources, it is also one of the richest sources of natural antioxidants such as phlorotannins, sulfated polysaccharides, fucosterol and fucoxanthins.25

Fucus vesiculosus. This algae is high in fucoidan and polyphenol, which have been assessed effective in enzyme and glycation inhibition as well as demonstrated additional antioxidant activity, as well as improved efficacy in skin brightening applications.26

Understanding the basics of how AGEs are formed and the skin conditions that occur will help professionals make better choices in the course of treatments and home care for clients.

Lydia Sarfati is a master esthetician and the founder and CEO of Repêchage. She was a contributing author to the Milady Standard Esthetics: Fundamentals, Twelfth Edition. Sarfati also authored Success At Your Fingertips: How to Succeed in the Skin Care Business. For more information, go to www.repechage.com, www.pro.repechage.com and www.LearningwithLydia.com.