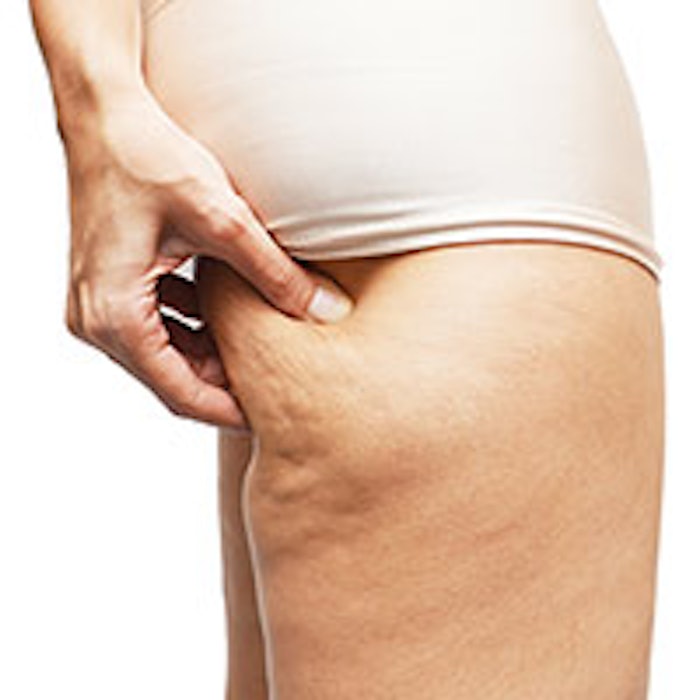 Much has been written about cellulite during the past five years, but, unfortunately, most of it has been repetition of the errors of the past. The first thing skin care professionals must understand is that cellulite is not an issue related primarily to adipose (fat) tissue. It is a connective tissue disorder—not really a disease.

Cellulite is a primary disorder affecting type I collagen that arises with the onset of the menstrual cycle. Type I collagen is the most prevalent protein in the body. It is the major nonbony structural tissue that exists throughout the body. In most instances, this component is of type I collagen, accounting for many female disorders that are driven by the sex hormones, mainly estrogen and progesterone. This is a critical concept to understand. If you find this concept difficult to believe, ask yourself why men do not get cellulite. Let’s take a look at the anatomy of the areas in which cellulite occurs.

The thighs and buttocks are the only areas afflicted with cellulite. This is because this area in the body is a reservoir of nutritional fat that nature has put aside to provide food for the infant in pregnancies associated with low food intake. This fat is not easily mobilized, so it is very difficult to remove. Normally, a fat cell, known as an adipocyte, has two receptors: one receptor stimulates fat to be utilized in a process known as lipolysis, and a second receptor prevents, or inhibits, lipolysis. The first receptor is known as a beta receptor and the second one is called an alpha receptor. Only in the area designated for pregnancy nutrition do the fat cells contain two alpha receptors and one beta receptor. Try as you might, you cannot remove this fat by vigorous dieting or exercise, although beauty magazines continue to recommend this.1

Remember, when performing your examination and evaluation of the client to assess for cellulite, do not look primarily at the thighs—look at the buttocks. It will become clearer why in a moment.

The next thing to remember is that there are only two layers of fat in the body: a superficial layer and a deep layer. These two layers are separated by connective tissue, known as fascia. The fat in both layers resides in compartments, much as you would see eggs in an egg crate. These compartments are separated by fibrous bands called trabeculae. They run vertically from the fascia of the deep muscle layer to the fascia under the dermis. 2, 3, 4 It is the destruction of these collagen bands and the release of the fat globules that are the cause of the appearance of cellulite. It has nothing to do with water-retention, poor circulation, accumulated lymphatic fluid or the ubiquitous scapegoat—toxins.4 Why does this happen? Because of the menstrual cycle!

Biochemistry of the menstrual cycle

Without going into great detail on the menstrual cycle, the pathophysiology of cellulite depends on the action of enzymes known as matrix metalloproteinases (MMPs) that are responsible for the shedding phase (bleeding) of the cycle. (See Figure 1.) Basically, the process is initiated with the secretion of two hormones from the anterior pituitary gland, follicle stimulating hormone (FSH) and luteinizing hormone (LH). There are other hormones responsible for the initiation of ovulation and later, menstruation. In the absence of pregnancy, the endometrium, which has proliferated in preparation for a pregnancy, has to be removed. The MMPs are responsible for this action. These enzymes (See Figure 2.) Cellulite can be seen in girls as young as 12–13, assuming they experienced menarche between 10–11. It is not known why this occurs, but there is sufficient literature to support a hormonal relationship between cellulite and the menstrual cycle. Initially, it was thought that estrogen stimulated the MMPs, when actually it is the estrogen and progesterone that suppress their function. In the late phase of the cycle, when estrogen and progesterone drop, the MMPs rise, and at the same time, a cytokine known as IL-1a becomes the major stimulant for the production of MMPs. Much research is being conducted to try and understand the intricacies of this connection, for herein lies the answer to many of the connective tissue disorders suffered by women. Anterior cruciate ligament disease, temporal mandibular joint (TMJ) disease, bladder relaxation, stretch marks, and perhaps even diseases such as lupus erythematosus and scleroderma may be related in some way to this process.

The education of skin care professionals and of the public is paramount in developing an effective treatment for this disorder. As long as estheticians and physicians believe that cellulite is a disorder of the adipose tissue per se, clients suffering from cellulite are fighting a losing battle. Just about every modality, including all the electromagnetic treatments; physical treatments, such as pressure and suction; thermal treatments; wraps and massage; are all, at best, palliative.5 What good does it do to destroy the connective tissue in the leg when it is already in pitiful shape? Yes, it will level out the skin by releasing the trabeculae that are still intact, causing the vallies of the undulating surface of cellulite to reach the level of the hills. The melted fat will cool, solidify and be metabolized, just like its brothers and sisters. New cells will develop and fill up the gap, because nature abhors a vacuum. Yes, fat cells do divide and multiply.

Is there any effective topical treatment? At present, it appears that some products are partially effective, but they have not yet addressed the critical point to protect the trabeculae from destruction by the MMPs. The second practice that must be done is to restore the architecture of the connective tissue to its original pristine condition. A number of research workers, mostly endocrinologists and gynecologists, are looking at the role of the fibroblast in cellulite. These are the critical cells that drive cellulite, because they produce the enzymes that destroy the collagen, as well as make the necessary collagen to repair the damage of cellulite. Actually, although a lot is known about fibroblasts, researchers still have a long way to go. The major hope for treatment is to find a safe, topical agent that will inhibit the MMPs and a second one that will effectively repair the damaged collagen. There are such agents, and they are currently being studied; however, they are not there yet.

Any woman who has cellulite should wear support pantyhose. Why? Perpendicular pressure against the long axis of the leg directs the fibroblasts to produce collagen rather than collagenase, which is an MMP. Anything that will foster good tissue, such as a diet high in antioxidants and vitamins with lean meat, is helpful. Although being overweight is not a cause of cellulite, it does not make it any better. There appears to be a definite genetic tendency, because some very fortunate women—about 5% of the United States population and most Asian women—do not seem to get cellulite. At present, researchers have no idea why, but therein could be a major key to the solution of the cellulite problem.

Asiatic acid, the major ingredient in Centella asiatica, is a very effective stimulator of new collagen production. Antioxidants, such as oligomeric proanthocyanidins (OPCs) and polyphenols from green tea are known to be MMP-inhibitors. There is no one single ingredient that is effective alone. The key is to inhibit the MMP destruction, restructure the collagen and restore the fat to its original compartments. That can be mobilized to a certain extent, and a common way to do this is to use xanthines, such as theophylline, to inhibit cyclic adenosine monophosphate (cAMP), allowing more lipolytic action to occur. Reducing and displacing that fat while applying mild pressure with support pantyhose can help in the restructuring of the normal tissue.

Peter T. Pugliese, MD has devoted himself to the study of skin physiology and influenced the course of professional skin care around the globe. Pugliese has contributed chapters to more than a dozen books and published more than 60 scientific papers. He has authored four books, including the first textbook written for estheticians by a physician, Advanced Professional Skin Care (Milady, 2005). He also is the co-author of Physiology of the Skin: Third Edition (Alluredbooks, 2011). He is a member of the 2014–2015 Skin Inc. Editorial Advisory Board.