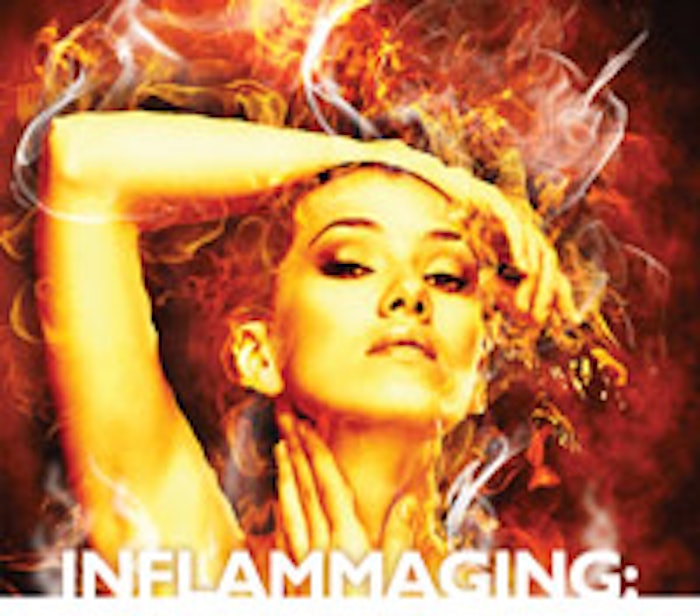 The skin care industry is fast approaching a watershed moment in the treatment of aging skin. Increasingly, scientific evidence suggests that many of today’s trademark treatments may actually exacerbate the conditions they’re designed to treat in the long term, thanks to a phenomenon known as inflammaging. This previously unknown consequence poses a challenge to product developers who must adapt their formulations to meet shifting consumer demands or risk losing their shares of the market. As the concept of inflammaging goes mainstream, it may result in a widespread change in the professional skin care industry, transforming everything from the ingredients that professionals use to the methods by which they use them. (See Tips to Address Inflammaging in the Treatment Room.)

First coined by University of Bologna professor Claudio Franceschi, PhD, more than a decade ago, inflammaging began as a theory linking underlying inflammatory changes to the causes of most age-associated diseases. Since its inception, research continues to present convincing evidence taking this concept from theory to fact.1–3

The term “inflammaging” is used to describe the aging phenomenon induced by chronic, persistent inflammation. Most people are familiar with the visible inflammation that can be seen on the surface of the skin, with redness representing a sign of infection, irritation or discomfort. However, inflammation can also be invisible. All skin—and certainly weakened or aged skin—is subject to inflammation, even at low intensities. It is this underlying inflammation that ultimately exhausts the body’s defense system, dismantling key youth-sustaining skin structures, and resulting in collagen and elastin degradation, as well as a breakdown of the skin’s barrier function.

The inflammaging process involves a highly complex chain of events, by which acute inflammation gradually gives way to chronic, or silent, inflammation. To understand how to combat inflammaging, skin care professionals must first understand the inflammatory cascade of reactions that erode the skin’s structure, ultimately manifesting in the form of deep wrinkles, hyperpigmentation and flaccid, inelastic tissue.

Inflammation is the body’s response to cellular aggression or injury. It represents a defense mechanism designed to heal cells from injury and protect the body from the consequences of that injury. Cell injury may occur due to trauma, genetic defects, physical and chemical aggressions, tissue death, foreign bodies, immune reactions and infections. Inflammation also facilitates early tissue healing and repair, and allows the body to restore itself to a normal form and function.

Chronic inflammation. In contrast, chronic inflammation is of prolonged duration and manifests microscopically by the presence of two different categories of white blood cells, known as lymphocytes and macrophages. Lymphocytes function as “killer” cells, disabling and destroying infected tissue, such as tumors or infected cells, while macrophages literally consume cellular debris and pathogens. Together, these aggressive forms of white blood cells can result in the scarring of connective tissue and tissue death.

The healing of an injury is a complicated process. It starts as soon as the injury occurs and can take nine months or more to complete. There are three phases to the healing process: the inflammatory phase, the proliferation phase and the remodeling phase.

During the inflammatory phase, pro-inflammatory proteins enter damaged areas, causing swelling as tissues push apart. Following this, white blood cells, including macrophages, begin the proliferation stage by cleansing the wound and jump-starting the repair process. During this stage, the wound contracts and receives the oxygen and nutrients vital for regeneration. Lastly, the remodeling stage is characterized by the production, organization and remodeling of collagen to strengthen the wound.

However, even after the wound has healed, the resulting scar tissue is more vulnerable to injury and deformation than the original tissue. Science now shows that repeated injury leads to the chronic state of inflammation known as inflammaging.4

Today, the direct link between extrinsic skin aging and inflammation is well-established and documented. Elias and Feingold demonstrated the reciprocal effect of many chronic inflammatory diseases—such as psoriasis, and atopic and seborrheic dermatitis—on the stratum corneum barrier, which maintains healthy hydration levels in the skin.5, 6

Inflammaging can be prevented—and even reversed—by using a wide spectrum of topical products formulated with anti-inflammatory and antioxidant ingredients. In addition to inhibiting the key mediators of inflammation and aging processes, these ingredients should help reinforce, protect and boost the antioxidant response system.

Two different classes of anti-inflammatory agents seem to show promising results: cyclooxygenase (COX) inhibitors and 5-lipoxygenase (LOX) inhibitors. Boswellic acid from the boswellia serrata tree; resveratol, found in grapes; and tamanu oil, from tamanu tree nuts, are just some of the natural inhibitors that can be used in skin care products.

Although anti-inflammatory ingredients are essential in the fight against inflammaging, successful treatment must also address two major skin issues. The first is reinforcing and protecting the integrity of the barrier function, which can be achieved through targeted topical care; and the second is the use of broad-spectrum UV protection.

As with any skin concern, inflammaging can worsen with prolonged sun exposure. Combined with treatments that target the source of inflammation, proper UV defense and barrier support can help minimize the visible effects of inflammaging.

Equally as important as using anti-inflammatory ingredients is avoiding aggressive ingredients that can further wound the skin and prolong the inflammaging cycle.

Certain acids—particularly those of smaller molecular size, such as glycolic acid—are a major source of irritation in many cosmetic products. Because of their size, they have been shown to reach the dermis where inflammation takes place.8, 9 Molecularly larger acids, such as lactic, malic, pyruvic and tartaric, don’t tend to penetrate the dermis, making them gentler on the skin and less likely to spark inflammation. It has also been found that using the chirally correct version of these acids can help further maintain the efficacy of the ingredients and minimize the risk of adverse side effects, including irritation.8

Another common irritant to avoid is benzoyl peroxide. A mainstay of professional and at-home acne treatments, benzoyl peroxide can contribute to irritating oxidative damage.10, 11 However, gentler alternatives exist in the forms of salicylic acid and sulfur, which have been shown to be similarly effective.

Of course, no discussion of inflammaging would be complete without addressing skin care’s anti-aging hero: retinol. The gold standard in renewal, retinol achieves its goal often at the cost of irritating the skin. Although retinoids themselves aren’t likely to change, science has found new ways to deliver these key ingredients through encapsulated systems that bypass their inflammatory side effects.

Inflammaging and the future of skin care

In an industry that moves at breakneck speed, the advent of inflammaging serves as both a wake-up call and an ultimatum to product developers, cosmetic companies and skin care professionals alike. The skin care game is changing, and if companies don’t keep up, their clients will look elsewhere. As science continues to explore the dynamics of inflammaging, new products and treatments will emerge to address this nascent concern.

Noureddine Mriouah is the product development director and principal scientist for CosMedix and Results Rx. With extensive training and education, including a masters of chemical engineering from the University of Paris, Mriouah is a recognized leader and expert in product formulation, research and development, production, process engineering and GMP regulations. He can be contacted at 678-303-1850 or nmriouah@astralbrands.com.

Tips to Address Inflammaging in the Treatment Room

Choose your acids wisely. Avoid acids of small molecular size, such as glycolic acid, that can penetrate the dermis. Instead, choose acids of larger molecular size that work in the epidermal layer, such as lactic, malic, pyruvic and tartaric acids.

Support the skin’s barrier function. After exfoliation, reinforce the barrier function by protecting the natural moisturizing factor (NMF) to guard against transepidermal water loss (TEWL). This can be achieved through the use of certain ingredients, including ceramides, squalane, fatty acids, phospholipids, amino acids, lactates and pyroglutamic acid (PCA).

Protect your results. Inflammaging can worsen with prolonged sun exposure, so be sure to end every treatment with a sunscreen application of SPF 30 or higher.