The ABCs of Glycation, Skin Redness and Acne at Face & Body Midwest 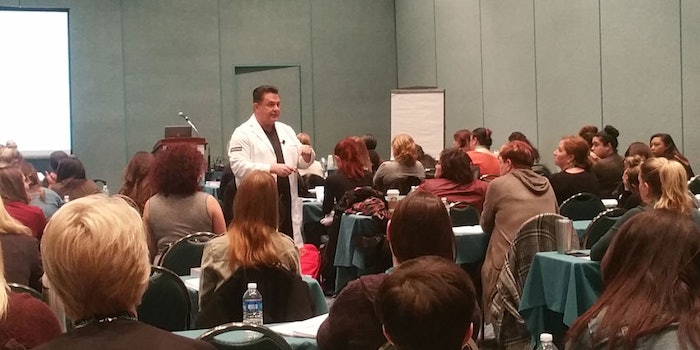 The science track at Face & Body Midwest's Advanced Education Conference stimulated the minds of attendees, giving them the knowledge they needed to improve their skin care efficacy. Among the topics discussed were glycation, adult acne, fulvic acid, skin redness and histology.

This was perhaps the liveliest topic of conversation among attendees to the 2017 Face & Body Midwest science session. And not just glycation in the skin, but how food preparation techniques impact the foods you eat and can increase or decrease the levels of glycation expressed in skin. Shannon Esau, of Rhonda Allison Skin Care, explained how proteins become cross-linked in the body after consumption and form advanced glycation end products (AGEs) in skin.

According to previous work by Draelos, AGEs bind to collagen and elastin, more avidly to elastin, which can be seen in the upper dermis in the realm of elastin. In fact, other work showed a section of a skin biopsy from the face of a 91-year-old revealing tangled masses of elastotic material in the upper dermis. This material consists of abnormal elastin fibers and protein and is usually associated with sun damage. It does not function like normal elastin and is quite stiff.

Esau fielded several questions about food choices and preparation, and agreed with one attendee who suggested the AGE units in products should be listed on their labels.

"It's really a new area," Esau said, explaining why this was not already the case. In the end, she concluded, "We can slow the process of glycation."

Led by regular Skin Inc. contributing author Robert Manzo, of Skinprint, this discussion opened with a simple explanation of the best skin care. "All good skin care must include both a humectant and an occlusive," said Manzo.

He went on to explain that when performing skin treatments using ingredients such as glycolic acid, which removes desmosomes from the skin barrier and leaves it exposed, you must then be sure to address this compromised barrier, especially against UV.

Glycation was perhaps one of the liveliest topics of discussion among attendees.

Other irritants to skin included cigarette smoke. "Cigarette smoke glycates the skin," he said, adding that if you're around smoke, once you are away you can stave off this reaction with an antioxidant treatments. "Vitamin C, or L-ascorbic acid, is a free radical scavenger and provides rapid, kinetic repair."

Parabens were another topic that stirred the pot. "Parabens are safe to use in consumer products!" said Manzo, waiting for a groan from the audience. (He heard none; in fact a few attendees shook their heads in agreement.) "The only reason [product developers] don't use them is because [consumers] say they don't want them."

Know your ingredients. This was one of Manzo's take-aways for the audience. He gave an example of ingredients ending in -ate. "If an ingredient ends in the letters -ate and is not labeled as a sunscreen, this is an ester."

You've got the touch. While chemists may know their ingredients, however, Manzo reminded and assured estheticians they had the upper hand, literally, on skin touch. "The value of touching skin is extremely important," said Manzo. "Chemists don't usually understand this aspect of a product."

Monika Machej of New Age Spa Institute led this discussion, which covered the hormonal fluctuations behind the appearance of acne, different stages and progressions of this afflication, and differences between adult and teen acne. She also gave some tips on ingredients and treatments.

"Anyone who is prone to acne should avoid iodine," she said. In addition, "You can't use acids on pregnant clients because they can cause melasma." Finally, she reinforced the notion that drying the skin out was a bad approach to treating acneic skin. "Without hydration, you won't get any results."

Taking treatments down to the cellular level, Dave Waggoner, of Skin Script Skin Care, reacquainted attendees with the various skin layers and how they are connected. He began with a fishing line analogy of keratin filaments.

Waggoner went into much greater depth, pardon the pun, of skin layers but reminded attendees, "We're not supposed to work past the dermal-epidermal juntion." He also explained the effects of too much sun as causing "epidermal thickening and dermal thinning; the opposite of what we're trying to achieve."

Presented by Niki Helferich, of GlyMed Plus, fulvic acid is considered an ancient healing remedy. The ingredient comes from soil, and is produced, for example, during composting to create nutrient-rich humus.

"This polyeletrolyte greatly reduces inflammation and redness," Helferich explained. "It does so by effectively delivers nutrients." Related work has also shown fulvic acid may promote extracellular anti-cancer mediators, most likely by stimulating immune-modulating molecules such as nitric oxide.

"You can see fulvic acid's delivery capabilities if you put a teabag in cold water," said Helferich. "Once you add a drop of it to the water, after a few seconds, the water turns brown because the fulvic acid draws the tea quickly out into the water."

After a full day of skin science insights, attendees were ready for a break. But not before they gave high marks to the entire lineup of science speakers.