The Truth About Parabens 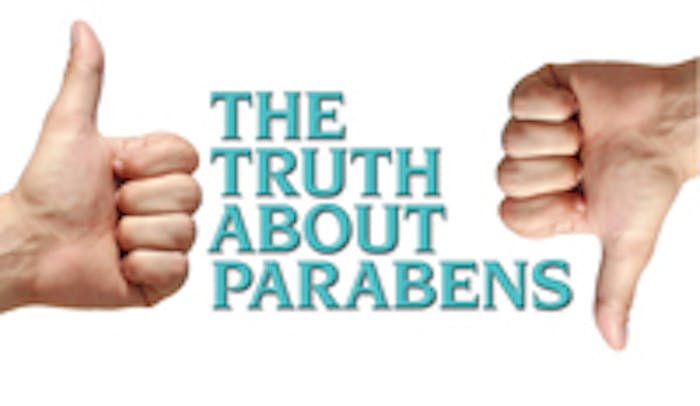 Did you ever play a game called “Telephone” when you were younger? It would start by one person passing information to someone sitting next to him, and that person, in turn, would pass the message to the next person and so on. When the last person received the message and was asked to share it with the originator of the information, the final result was often a far cry from the original statement. Although no one intentionally meant to mislead, the facts became distorted, exaggerated or even false as word spread from one person to the next. The same can be said about what most industry professionals think they know about parabens and skin care.

It is time to go back to square one and revisit the original research that set off alarm bells, document what is known to be fact-based on the subsequent research, identify what has been proven and what remains uncertain, and highlight the most recent research findings.

The issue of parabens and cancer is definitely not as simple as it may seem. Parabens are some of the most common preservatives used in personal care products, prescription drugs and even food. Beginning in 1998, studies in rats began to uncover that parabens had estrogenlike properties. Even though the findings uncovered a weak form of estrogen, it was there.1 This resulted in an avalanche of media attention.

At issue was the following critical point: If parabens can bind to estrogen receptors and cause an estrogenlike effect, will this contribute to the formation of cancerous cells? Most scientists agree that when ingested, parabens are metabolized and lose their ester group, making them mimic estrogen less strongly.2 But what happens when they are contained in topical products?

The Darbre study. A good place to start is to revisit the research study that originally raised the issue of parabens’ possible link to breast cancer.3 Phillipa Darbre’s findings demonstrated, in a study of 20 subjects, that parabens can be found intact in the human breast.3 But the researchers themselves noted the following crucial facts: The study was small, there were no controls, normal breast tissue was not studied to determine comparative data, no other parts of the body were studied, and the source of the parabens was not identified.

Darbre is currently more circumspect with the results of her small study and now says that there is a functional role for the combined interactions of cosmetic chemicals with environmental estrogens, pharmacological estrogens, physiological estrogens and phytoestrogen in the rising instance of breast cancer.4 Nowhere do the original researchers reach the conclusion or state that parabens in cosmetics are cancer-causing, but they do provide the warning that the issue needs additional study.

No one on either side of the paraben debate disagrees with that conclusion. The controversy about Darbre’s 2004 paper is in part based on a simple question: Can measurement of a compound in a tissue provide evidence of causality when it is not known how it got there or if it is present in healthy tissues because only 20 individuals with breast cancer were studied?

Malignant melanoma link? There is additional research that claims that there is an intact transmission of endocrine toxicity, absorption and potential health risks inherent in all natural and synthetic parabens. The Journal of Applied Toxicology, which has previously published articles on the safety of parabens, also published an article that states that parabens may influence the development of malignant melanoma, which can be shown to be influenced by estrogenic stimulation.5 How parabens affect this activity is yet to be definitively determined.

Parabens are found in greater concentrations than cosmetics in a myriad of consumables, including fruits, vegetables and drinks. Some everyday items replete with parabens and endocrine disruptors include soybeans, carrots, peanuts, corn, strawberries, blueberries, black tea and green tea, to list only a few. Many of the parabens found naturally in foods do have an estrogenic effect when tested. Yet, parabens found in cosmetics are 100,000 times weaker than estradiol, the estrogen naturally produced by the body.8

Because of the fire storm brewed by the Darbre study, many respected organizations—government and otherwise—have released findings supporting the idea that parabens in topical cosmetics are not a danger to consumers.

The ACS. The American Cancer Society (ACS) has concluded, based on its research findings, that there is not good science to support a claim that the use of parabens in cosmetics can increase an individual’s risk of developing breast cancer.7

The FDA. The U.S. Food and Drug Administration (FDA) began studying the effects of parabens in response to the outcry of their potential estrogenic effect and link to breast cancer.9, 10 The FDA states that parabens are safe for use in cosmetics, and it also says that, based on the weight of all the current scientific evidence, there is no reason for consumers to be concerned about the use of products containing parabens.

The CIR. The Cosmetic Ingredient Review (CIR), an organization that reviews and assesses the safety of ingredients used in cosmetics in an open, unbiased and expert manner, consolidated more than 265 studies in The Journal of Toxicology that noted a women’s daily cosmetic regimen using products that contain parabens caused no adverse reproductive effects and confirmed the safety of parabens.11

SCANCOS. Because the issue of parabens is still a controversial one, the Scandinavian Society of Cosmetic Chemists (SCANCOS) presented the latest round of studies regarding parabens in 2009. The goal was to determine if there was an estrogenic and harmful effect to humans from parabens. This study confirmed the results of a number of other research studies that concluded parabens are metabolized rapidly by the body and therefore cannot exhibit any adverse effects.12

A study in the Journal of Steroid Biochemistry and Molecular Biology claimed that, in order to obtain an estrogenic effect from parabens, which could be potentially harmful, the dosage would have to be 25,000 times higher than that used to preserve products.13 The same research claims that estrogenic effects caused by doses of parabens received from consumer products are insignificant compared to natural estrogens and other xenoestrogens, meaning that people are exposed to more estrogens from a myriad of other sources and in larger doses than from cosmetics.

A large number of consumer groups and environmental organizations are questioning the current research that attests to the safety of parabens in cosmetics. There is reasonable evidence that there is estrogenicity in parabens, both natural and synthetic, but the relevance of this link to breast cancer is tenuous without more research, which is urgently needed.

Spa professionals should educate their clients using the facts about parabens. After that, let clients make their own choices. Carry the best and most efficacious products, and consider carrying a line that does not contain parabens if you believe it will meet your clients’ needs.

There is no way to end the controversy about the safety of parabens without objective, controlled, double-blind research into the matter, which has yet to be published. The debate continues.