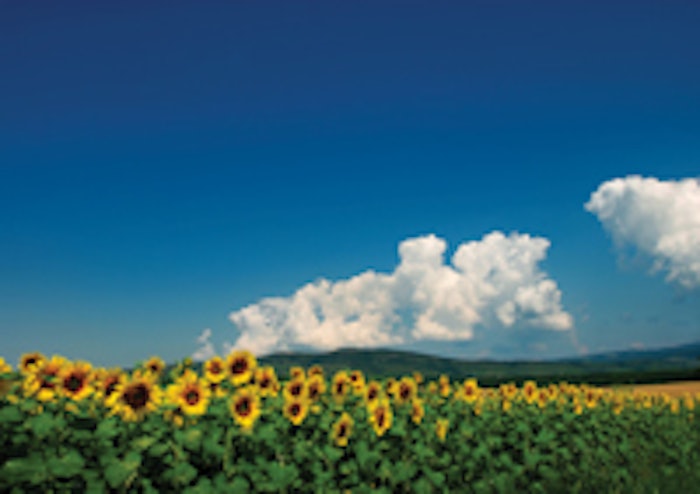 Vitamin E was first found to be essential for reproduction in 1922, but it was not until 1936 that Herbert McLean Evans discovered vitamin E and its chemistry through a series of rat-feeding studies and named it tocopherol.1 The name “tocopherol” is from the Greek words tokos, meaning “childbirth,” and pherein meaning “to carry.” The “ol” at the end of the word designates it as an alcohola.

Vitamin E can be divided into two basic forms—tocopherols and tocotrienols.

Tocopherols. Figure 1 illustrates the four structural forms of tocopherol. On the left is a ring structure called the chromanol ring, which includes carbon atoms in a circle with a side attachment, also in a ring form, containing an oxygen atom. Look carefully at the molecule, and you will see an OH group and the left side of the larger ring. This is the business end of the vitamin E molecule. Notice that it does not change position in all form types of tocopherols. Concentrate on this OH group, called a hydroxyl group, and then look at the three other groups of atoms attached to the chromanol ring. The position of these groups, known as methyl groups, gives the name to the various types of tocopherol.

Note that in the alpha form, there are three methyl groups on the chromanol ring: one at the top and one at the bottom of the ring, and a third one on the carbon below the hydroxyl groupb. In the other forms illustrated in Figure 1, the only difference among the tocopherols are the number of methyl groups and their positions. Note that when a methyl group is removed, as in beta tocopherol, a hydrogen (H) atom must be added to balance the whole molecule. Now you can see that by removing methyl groups and adding hydrogen atoms, four different tocopherols have been created. They are known as alpha, beta, gamma and delta tocopherols with the corresponding Greek letters α, β, γ, δ.

Tocotrienols. There are also four forms of tocotrienols. When you see a chemical named with the designation -ene, it means that a double bond is present in the molecule between two carbon atoms. For example, -C-C- is a single-bond carbon structure, but C=C is a double-bond carbon structure. If there is more than one double bond in a string of carbons, the number can be figured out by using a prefix before the -ene designation. For example, C=C is known as a diene, while C=C=C is known as a triene. It is not necessary that they follow in sequence since C=C-C-C=C-C=C is also a triene. Now you have mastered the last half of tocotrienols. It is nothing more than the tocopherol molecule with three double bonds in the carbon chain. Because the chromogen ring is the same, there are four variations also in the tocotrienols. See Figure 2 for an illustration of these four types. Now look at the long carbon chain hooked onto the chromogen ring.

This chain attached has 12 carbons in a row with four more carbons, as methyl groups, attached to the chain. Look at the tocotrienols’ long chain, and you will see three double bonds spaced along the chain. This is the only difference between the tocopherols and the tocotrienols.

Many natural foods are good sources of vitamin E. See Natural Vitamin E Sources. Synthetic vitamin E is derived from petroleum products and is manufactured as all-racemicc α-tocopheryl acetate with a mixture of eight stereoisomers. In this mixture, only one α-tocopherol molecule in eight molecules is in the form of real α-tocopherol (12.5% of the total). The United States Department of Agriculture (USDA) now converts international units (IUs) of the racemic mixture to milligrams of equivalent α-tocopherol using1 IU racemic mixture = 0.45 milligrams α-tocopherol.

At the present time, there are no commercial sources of pure tocotienols except in very expensive research quantities. They are available in natural oils such as palm, rice bran, wheat germ, barley and oat.

Because the tocotrienol’s long carbon chain is unsaturated, it is flexible and more easily incorporated into the cell membrane. It is able to move about in the membrane and the cell more readily. This may account for some of the differences in function between the tocopherols and tocotrienols.

Vitamin E and the skin

Two of the major functions of vitamin E in the skin are protection from ultraviolet (UV) light damage and maintenance of the barrier function. DNA damage by direct absorbance of UV radiation and indirect DNA damage caused by reactive oxygen species (ROS) may lead to mutations, which can result in UV-induced skin cancer. The most prominent direct DNA damages are the cyclobutane pyrimidine dimers, thymine dimers and other photoproducts. Indirect DNA damage is caused by ROS, such as singlet oxygen (1O2) and free radicals, such as the superoxide anion radical (.O2), the perhydroxyl radical (.HO2) or the hydroxyl radical (.OH).

This is called oxidative damage because it is a major cause of aging skin and skin cancer. Singlet oxygen, for example, has damaging effects on big biomolecules, affects genes and destroys cells. This is really bad because singlet oxygen can be produced by both visible and UV light, especially if stimulated by phagocytes during the oxidative burstd. There is evidence that singlet oxygen has pronounced effects on cellular signaling events that are involved in the expression of a variety of proteins. This includes the protein known as interstitial collagenase (matrix metalloproteinase-1, MMP-1), which is responsible for the breakdown of type I collagen in the dermis, a major cause of sagging skin and wrinkles.2 This is only one link to aging by free radical action.

Even a little UV irradiation, not even enough to cause reddening of the skin, is able to deplete the content of human epidermal α-tocopherol, thereby decreasing antioxidant protection. Within 24 hours, however, α-tocopherol contents of the irradiated skin can increase to almost baseline levels in humans, suggesting that the skin has the ability to replace lost α-tocopherol in response to oxidative stress. Within that period, however, a lot of epidermal damage can occur.

Depletion of barrier α-tocopherol may represent an early pathophysiological event leading to the initiation of barrier disruption and inflammation in environmentally damaged skin. The stratum corneum, being the outermost skin layer and barrier of the body, is frequently exposed to a pro-oxidative environment, such as UV solar radiation, air pollutants and chemicals. With UV light, UVB is believed to interact directly with DNA to initiate signature mutations of basal and squamous cell carcinomas. UVA wavelengths (320–400 nm) are believed to interact indirectly, inducing the production of free radicals. Free radicals may indirectly damage DNA and cause protein damage, a major contributor to premature aging, or photoaging.3 Once barrier damage is in place, the skin cannot function normally and water loss, bacterial invasion and free radical changes run rampant. This damage promotes premature skin aging, as well as skin cancers. Vitamin E has a critical role in preventing these problems.

Vitamin E is a very important part of your skin care arsenal of therapeutic weapons. As a major antioxidant, it is also a major anti-aging biochemical. It can be used before and after sun exposure to reduce free radical damage in the skin, and therefore should be used in sunscreens. It should always be considered in skin-lightening treatments, either topically or systemically.

Keloid and hypertrophic scars result from excessive collagen deposition, although their cause is not known. Many articles have been published on the management of hypertrophic and keloid scars, but still, there is no universally accepted treatment method. Hypertrophic scars and keloids have been shown to respond to many treatment modalities, including intralesional injections of corticosteroid, topical silicone or other dressings, and pulsed-dye laser treatments. Biologic agents, such as vitamin E, that are directed toward the aberrant collagen proliferation could be an important addition to the current treatment modalities in the near future. Vitamin E does not remove scars, but softens the collagen, making them more susceptible to additional treatment.4

Do not use tocopheryl acetate as a topical vitamin because it is inactive on the skin’s surface. Once it penetrates into the epidermis, it becomes powerful vitamin E. The main reason it is used as tocopheryl acetate is to keep it from undergoing oxidation in the cosmetic product or on the skin’s surface. It is changed in the skin by esterases in the epidermis. Two other forms of vitamin Eas esters are tocopheryl nicotinate and tocopheryl linoleate—both excellent ingredients in cosmetic formulas for both treating and maintaining aging skin.

Vitamin E is the major lipid-soluble antioxidant in the cell antioxidant defense system and is only obtained from the diet. Vitamin E is a term used to describe a family of eight naturally occurring compounds that are synthesized by plants. There are two types—tocopherol and tocotrienols—and four forms of each. In both types, the forms are designated as alpha, beta, gamma and delta.

The skin is exposed to UV light, a major initiator of free radicals, as well as metabolically generated free radicals. Using both oral and topical vitamin E can help prevent, or markedly reduce, damage from free radicals. Vitamin E is a major therapeutic agent in slowing down the aging process and as a preventive against vascular damage.

a Alcohols are chemical compounds that contain one or more hydroxyl groups, often at the end of the compound.

b All these carbon atoms are numbered, but we really do not need to know that for our purpose.

c Racemic means both “d” forms and “l” forms are present so it is a “dl” form.

Editor’s note: To learn more about the physiological effects of vitamin E from Dr. Pugliese, log on to www.SkinInc.com/physiological.