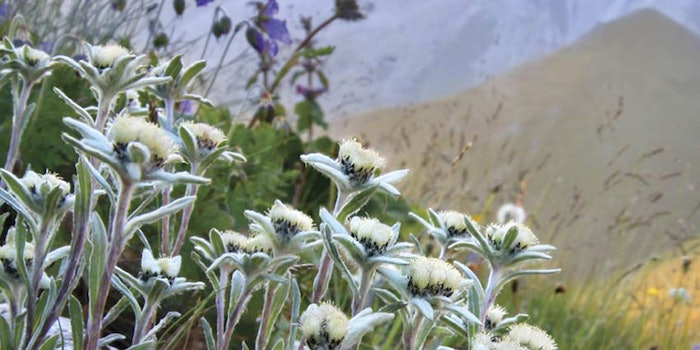 Sometimes in life, you get what you get, so you might as well make the most of it. If Aunt Molly knits you an ugly sweater for your birthday, you put it on and wear it proudly knowing she put her heart into it. And ultimately, it keeps you warm. This is how you might picture the life of a mountaintop extremophile—minus the sweater.

Extremophiles are organisms that thrive under the worst conditions on Earth. Interestingly, the term extremophile comes from the Latin extremus, meaning “extreme,” and Greek philiā, meaning “love.” There’s no doubt, they hold something deep down inside that helps them not only to survive, but to flourish. And science has unraveled some of these survival mysteries to benefit skin care.

There are several extremophile types:1

Considering we’re in the midst of surviving bitter winter conditions, let’s take a closer look at the cryophiles—especially those adapted to Alpine mountain landscapes.

The stem cell extract of this flower has been shown to protect and maintain the functioning of human dermal stem cells against UV- and visible light-induced stress. It also enhances the formation and proliferation of dermal stem cells, maintaining their renewal potential despite environmental stress.

This, in turn, helps to re-densify the skin matrix. A study of 20 women between the ages of 44 and 59 with sun damaged skin who used the extract found their skin condition improved by almost 10% in just four weeks.

Snow algae (Coenochloris signiensis) is another great survival strategist. This single-cell alga grows in Alpine or polar permafrost climates. Typically green in color, the algae turns red in early summer when it produces more carotenoid pigments due to increased UV radiation. It also produces secondary metabolites such as biopolymers, antifreeze glycoproteins, stress modifiers and osmotically active amino acids and sugars to survive in this habitat.

When used in personal care, snow algae powder stimulates the longevity gene, Klotho, and activates AMPK, a “master switch” in the cellular defense and energy system. This ingredient visibly improves skin structure, evens out skin tone and reinforces the skin’s barrier function through various mechanisms, including anti-matrix metalloproteinase (MMP) effects and rejuvenation of the dermal-epidermal junction. It also imparts smoothing and moisturizing effects.

Extremophiles in the Spa

Cryophiles have brought their skin benefits to the skin, largely for anti-aging and protection benefits.

Edelweiss. Hydropeptide uses edelweiss in its Hydrostem+6 to guard against free radical damage and create more radiant, youthful skin. GlyMed Plus also uses edelweiss in its DNA Reset Face & Neck Cream to prevent against the formation of wrinkles. The edelweiss plant stem cells contained in the cream contain adaptogens that help the body adapt to internal and external stressers. The ingredient is said to block involuntary muscle contractions that lead to wrinkle formation.

Dermaquest also uses edelweiss for its anti-aging benefits in a few of its products including its Stem Cell 3D Tinted Moisturizer, where it is combined with jasmine and gardenia stem cells to rejuvenate skin and reduce the appearance of wrinkles.

Similarly, PureErb formulates with edelweiss in its Bulgarian Rose Soothing Toner to soothe and soften sensitive skin. Janel Luu, CEO of Le Mieux and PurErb, noted “Edelweiss may look like a tiny delicate plant, but the actives that the plant uses to protect itself from its harsh native environment can be a powerful addition to your anti-aging skincare arsenal. Its actives contain superior levels of leontopodic acids A and B as well as 3,5-dicaffeoylquinic acids to help protect against free radical damage; amino acids to help promote the synthesis of collagen and elastin; polysaccharides to help the skin retain water and prevent loss of elasticity; and phytosterols to help prevent collagen breakdown and encourage collagen production.”

Ice Age plant. The stem cell extract of Saponaria pumila was only recently launched; therefore, it is not yet proliferated in spa skin care. However, it has recently made its way into the new Bio-Firm Hydrogel Concentrate from MyChelle Dermaceuticals, where it helps to improve skin elasticity and firmness by protecting and vitalizing dermal stem cells while fortifying the skin’s self-defense activities.

Snow Algae. Snow algae definitely has risen in the ranks as an anti-aging ingredient in spa skin care. Éminence uses the ingredient in its recently launched Firm Skin Targeted Treatment to control the visible signs of aging. Boldijarre Koronczay, president of Éminence, explained, “Snow algae is a used to repair and rejuvenate skin at the cellular level. Due to its unique ability to thrive in freezing temperatures and defend against UV-induced damage, this potent ingredient also contains compounds that protect skin against environmental aging and transepidermal water loss, even in extreme weather conditions.” Circadia has also recently launched a product with snow algae, its Snow Algae and Spiruline Cooling Mask, where it protects the cells while helping to repair them. Its use leads to improved cellular defenses, oxidative stress resistance, cell detoxification and repair. G.M. Collin also uses snow algae in its Diamond Serum to rejuvenate skin.

So the next time you’re scaling snow-encrusted slopes, take a page from the extremophiles. Apply their techniques topically, to protect your skin, and crawl into that ugly sweater as your very own empowered extremophile, adapting to flourish in your environment.