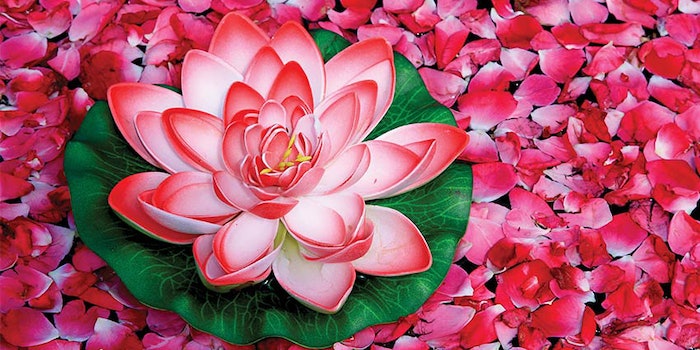 Lotus, also known as sacred lotus, water lily or Nelumbo nucifera Gaertn. (N. nucifera), may be the perfect embodiment of youth and longevity. Native to central and northern India, northern Indochina and East Asia, the plants adapted to grow in the flood plains of slow-moving rivers and delta areas, where they drop hundreds of thousands of seeds to the bottom of ponds every year.1 According to Wikipedia,1 some of these seeds sprout immediately while many are eaten by wildlife. However, the remaining seeds can remain dormant for extensive periods when the ponds dry out, rehydrating and growing new colonies after flood conditions return. As such, the Chinese regard the plant as a symbol of longevity; in fact, the longest recorded lotus germination from seeds was in northeastern China, which reportedly lasted for 1,300 years—taking anti-aging to the extreme.1

Interestingly, a paper published in 1996 in Nature2 found that the lotus has the ability to regulate the temperature of its flowers similarly to humans and other warm-blooded animals. The New York Times reported on the paper,3 detailing the plant’s ability to maintain a temperature of 30-35°C (86-95°F) even when the air temperature dropped to 10°C (50°F). According to the story, the researchers suspected the flowers may do this to attract cold-blooded insects to ensure pollination.

All parts of the lotus plant have been utilized in folk medicine, ayurveda and traditional Chinese medicine (TCM). In China, for example, lotus seeds have a cultural history dating back approximately 3,000 years. As early as the Han Dynasty, lotus seeds are on record as being sweet and astringent, and for nourishing the heart and kidneys in “Shen Nong’s Herbal Classic.”1

Continue reading about the skin benefits of lotus in our Digital Magazine...