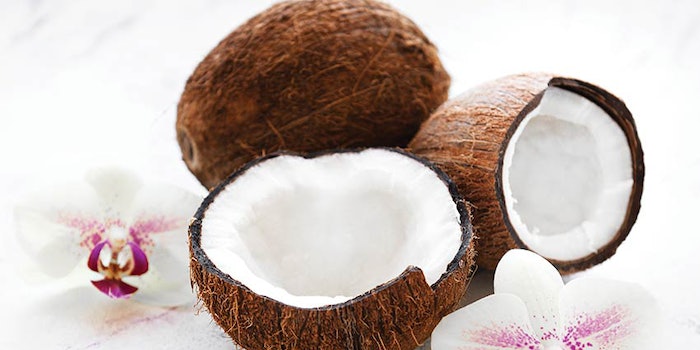 By now, we’re in the stride of summer and with any luck, beaches have opened with safe social-distancing measures in place so we can enjoy the sun and surf. For many of us, there is perhaps no stronger a connection to summer than the scent of coconut wafting across the sand as beach-goers dutifully apply their SPF. Beyond the sweet, warm, rich aroma, though, coconut has so much to offer.

The coconut palm, or Cocos nucifer, has been described1 as the “Swiss army knife of the plant kingdom.” It provides a high-calorie food, potable water, pragmatic reusable fiber, e.g., that can be spun into rope, and a hard shell that can be burned as charcoal—not to mention its buoyant nature, which comes in handy for coastal life. It is one of the most useful plants in the world, and is often referred to as the “tree of life,” providing food, fuel, cosmetics, folk medicine and building materials, among many other uses.2

Coconut is believed to have originated in the coastal areas of Southeast Asia and Melanesia.3 According to Wikipedi,2 its name comes from the historic Portuguese and Spanish word coc meaning “head” or “skull,” in reference to the three indentations on the coconut shell that resemble a face. Coconut may refer to the whole coconut palm, the seed or the fruit—which botanically is a drupe, not a nut.2

While its origin is debatable, in prehistoric times, coconuts spread naturally on ocean currents to the tropical Pacific islands, toward India and to East Africa.3 Plant DNA reveals there are two clearly differentiated populations of coconut, initially cultivated in two separate regions: one in the Pacific basin and the other in the Indian Ocean basin.1, 4

Coconuts have cultural and religious significance in certain societies,2 particularly in India, where it is used in Hindu rituals. It forms the basis of wedding and worship rituals in Hinduism, underlies a Coconut Religion in Vietnam, and is featured in the origin myths of several cultures. According to a report by Healthlin, coconuts have been grown in tropical regions for more than 4,500 years but interest has grown in them more recently for their flavor, culinary uses and potential health benefits.4

Continue reading about the benefits of coconut and its uses in our Digital Magazine...