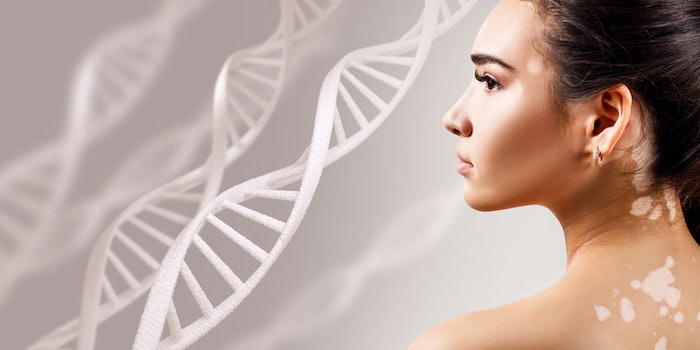 Researchers at the University of Colorado School of Medicine have discovered that both genetic and environmental factors play a significant role in the onset of vitiligo. While the genetic basis of vitiligo has been well researched, researchers found there was still a lot of unidentified factors that contribute to the disease. The findings of this research were published in the American Journal of Human Genetics.

In the study, Richard A. Spritz, M.D., director of the Human Medical Genetics Program and professor of pediatrics at the CU School of Medicine, and his co-authors reviewed two types of vitiligo cases. These two types of cases included the simplex, when vitiligo appears in individuals with no family history of the disease; and multiplex, when there are family members related to the individual who also have the disease. The researchers combined the 50 vitiligo common risk variants together and made a genetic risk score, that they then compared to the simplex and multiplex cases.

"The paper could be called a first chapter to the 'vitiligo instruction manual,'" Spritz said. "We found that the vitiligo genetic risk score is higher in the multiplex families than in the simplex cases, and the more affected relatives in the family the higher the risk score. That means that vitiligo in multiplex families and simplex cases is basically the same, but that the families with multiple affected relatives have higher genetic risk. That means that the same treatments probably will be effective in both types of cases."

Spritz and his co-authors also published a second article, which was a letter to the editor in the Journal of Investigative Dermatology. In this article, Spritz notes that the average age of onset for vitiligo has changed dramatically in the past decades. The authors further note that one or more environmental changes have actually delayed the onset of vitiligo as well as altered triggering it.

The environmental factors that researchers discovered made an impact include: The Clean Air Acts of 1963 and 1970, the Nuclear Test Ban Treaty of 1963, the Water Quality Act of 1969 and the establishment of the Occupational Safety and Health Administration in 1970. More recently, the emphasis on the use of sunscreens and sun protection as well as eating habits have also been found to contribute. In 1970, the consumption of yogurt became more common, which the authors went on to note could potentially alter the gut microbiome for many people.