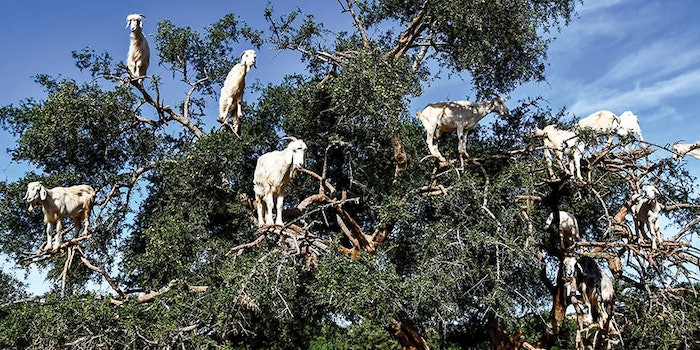 Argan oil is produced from the kernels of the argan tree (Argania spinosa L.), which is native to Morocco. The region and tree are tightly interwoven, such that argan became the emblem of the lands of the country.1 A. spinosa is believed to be one of the few surviving species of the Tertiary period, some 1.8 million to 65 million years ago.2 This longevity has been attributed to the plant’s ability to withstand the long periods of drought and heat, dry soil and harsh conditions of the Moroccan climate.

Argan trees can grow up to 10 meters (~32 ft.) in height and live for 200 years. At night, the tree attracts atmospheric moisture and store it, spreading it throughout the plant to the roots, which can grow 30 meters (~98 ft.) deep. When the weather is too extreme, the trees even lose their leaves to avoid evaporation and enter a state of hibernation to emerge when conditions are more favorable.1

One of the first reported uses for argan oil was by the Phoenicians (1500-300 B.C.) to fuel lamps. Later, the Berber people are said to have discovered the cosmetic and nutritional benefits of the oil and began to incorporate it into daily life; for example, using it as a skin protectant against the dry climate.1

The argan tree has many uses for both humans and animals. Argan oil was a go-to cure for everything from chickenpox to blood circulation.3 The oil also was, and still is today, used to make almond-argan butter by mixing it with honey and almonds. After the oil is extracted, the remainder of the seed becomes a peanut butter-like paste, which is sweetened and used as a breakfast dip for bread.3 Argan oil also is used in cooking and frying for its rich, nutty flavor and to add flavor to salad dressings or stirred into couscous.4

Animals turn to the argan tree for food. The soft pulp surrounding the nut and seed paste from which the oil is extracted serve as animal feed for sheep, goats, camels and cattle. Argan tree fruits and leaves are also consumed by livestock.4 Goats often climb the trees to reach and eat the fruit, standing among the branches, which can make for a peculiar sight.3

Continue reading about the skin benefits of argan oil in our Digital Magazine...

Rachel Grabenhofer is the managing scientific editor of Cosmetics & Toiletries Skin Inc.’s sister brand for cosmetic chemists. She’s a member of the Skin Microbiome Council and Society of Cosmetic Chemists, and for several years, led judging panels to honor the best ingredients in cosmetics.