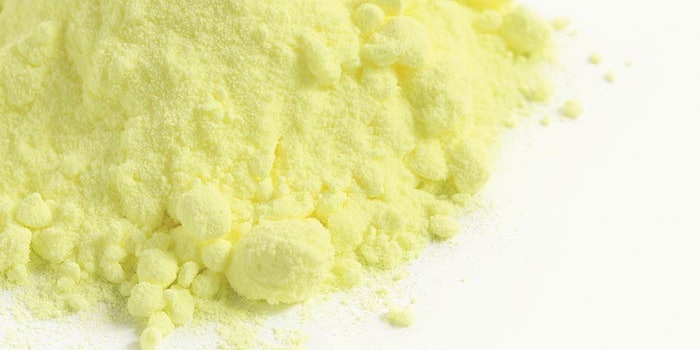 Sulfur’s reputation precedes it, sticking in most people’s minds as the embodiment of rotten egg stench, but the chemical element alone does not smell in its pure form. It is only upon exposure to an aqueous acidic environment, which causes it to oxidize to hydrogen sulfide, that it takes on a foul smell. However, a little goes a long way; it also only takes a minuscule amount to generate a very strong odor.1

Sulfur occurs naturally, alone or as sulfide or sulfate minerals. Its use was mentioned in ancient India, Greece, China and Egypt; it also is referenced in the Torah (Genesis).2

Historically, and in literature, sulfur is also referred to as brimstone, which means “burning stone.” While this is likely due to its association with volcanic activity, some resources connect it with the biblical reference that hell is said to smell of sulfur. In addition, English translations of the Christian Bible refer to burning sulfur as brimstone; this gave rise to the term fire-and-brimstone in reference to sermons where churchgoers are passionately reminded of a fate of eternal damnation for disbelievers and unrepentant sinners.2

Throughout history, sulfur has served many purposes, primarily leveraging its antimicrobial activity. In traditional skin treatments, elemental sulfur was used in creams to alleviate conditions including scabies, ringworm, psoriasis, eczema and acne. According to the Ebers Papyrus, sulfur ointment was used in ancient Egypt to treat granulated, inflamed eyelids. It also was used for fumigation, medicine and bleaching cloth.2

During World War II, army medics could be seen sprinkling yellow powder onto wounds—sulfa powder, or sulfanilimade.3 Under the product name of Prontosil Rubrum, it was reportedly one of the first drugs used to cure bacterial infections.4

Continue reading about the skin benefits of sulfur in our Digital Magazine...