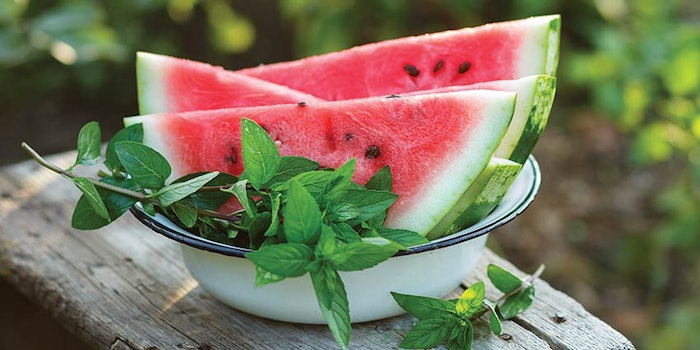 Watermelon’s history is a bit “fuzzy,” quite literally, according to an article in National Geographic (Nat Geo).1 Apparently, the fruit had been incorrectly classified as Citrullus lanatus—lanatus meaning “hairy”—which refers to a bitter variety of the fruit with a wooly outer rind. The correct name, Citrullus vulgaris, refers to the sweet variety; but a nomenclature committee during a botanical congress in 2017 ruled in favor of conserving its given name.2

Considering watermelon’s identity crisis, it’s no wonder there is also confusion about its origin. However, Harry Paris, a horticulturalist in Israel, is credited in the Nat Geo article as having collected clues. Archaeologists are said to have found watermelon seeds at a 5,000-year-old settlement in Libya. Seeds and paintings of watermelons were also found in Egyptian tombs, including King Tut’s, from more than 4,000 years ago.1

Writings from 400 B.C. to 500 A.D. indicate watermelon was transported from northeastern Africa to the Mediterranean countries. There, physicians including Hippocrates reportedly praised the fruit for its healing properties.1

Watermelon is 91% water and 6% sugars.2 It contains some essential nutrients including vitamin C and has been hailed as a good source of antioxidants.3 The red pulp contains carotenoids including lycopene, while the amino acid citrulline is produced in the white part of the rind.2 The potassium and citrulline content in watermelon have been found to relax blood vessels and reduce blood pressure.3

Continue reading about the skin benefits of watermelon in our Digital Magazine...