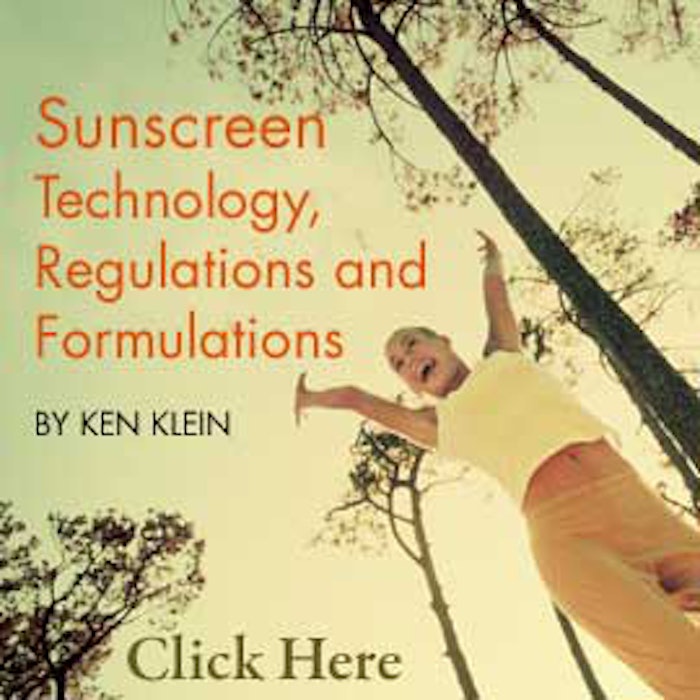 Well-known dermatologist Albert Kligman, MD, once said, “Wear a sunscreen every day of your life, or live as shady a life as possible.”
There is no doubt that exposure to sun will have deleterious effects on the skin. Some of these effects, such as age spots and wrinkles, may seem minor, and others, such as skin cancer, are quite severe. Years ago, sun worshipers craved exposure to the burning rays and a dark tan was a great thing to have. Teenagers believed that by applying baby oil, they would maximize their tan while getting protection from the sun. Today, everyone knows better—or they should. It has been estimated that for every burn a person experiences during a lifetime, the chance of getting skin cancer increases by 10%.

Sunscreen technology
The world of ultraviolet rays (UV) is divided into the following areas:

UVC (200–290 nm). This radiation is the most energetic, but mainly is absorbed by the ozone layer. Even at the North and South

UVB (290–320 nm). This radiation is responsible for almost all sunburns and skin cancer. It has been estimated by Frederick Urbach, MD, of Temple University, that 95% of all skin cancer results from exposure to UVB rays.

UVAI (340–400 nm). This is the least energetic of all UV radiation, but it is the most deeply penetrating. Although they are not responsible for burning, UVAI rays can cause wrinkling and premature aging. In some cases, they can cause DNA damage, and thus, skin cancer.

UVAII (320–340 nm). This type of radiation can cause slight skin reddening and long-term damage.

Sunscreen regulations
Sunscreen products are regulated as drugs by the U.S. Food and Drug Administration (FDA). So what, according to the FDA, is a

What, then, is a cosmetic? A cosmetic product is intended to have a topical and short-term effect. It should be rubbed, sprayed or sprinkled onto the skin, and should not penetrate it. It is intended to beautify and/or cleanse.
The FDA published a final monograph in 1999 that defined which sunscreens could be used in the United States. Currently, the FDA permits the use of 16 in this country. Regulations vary greatly in other countries, with many more sunscreens being permitted in the European Union, Canada, Australia and Japan. What is the maximum concentration of each sunscreen that can be used? (See Approved Sunscreens). And what claims can be made? Following are a few claims that are not permitted.

All-day protection. Because this depends on a person’s MED and other factors described earlier in this article, you cannot say this.

SPF 0 or 1. These claims were popular for tanning products. The FDA says that SPF implies protection. An SPF of 1 means that the product offers absolutely no protection from sun exposure. An SPF of 0 actually means that if you apply the product, it will act as a magnet for the sun’s UV energy and you will instantly burn to ash. This is, of course, silly, as well as misleading.

SPF 45. Although there is an abundance of products marketed claiming an SPF of 45, this is not permitted.

So, why hasn’t the FDA cracked down on companies making illegal claims? That is difficult to answer. It still has a few issues to address regarding sunscreens: UVA claims, UVA testing methodology, approval of European-approved sunscreens and European data.
Additionally, it has been petitioned to allow SPF claims of 50 and even higher. It is anticipated that during 2007, the administration will publish its comments in the Federal Register and will strictly enforce all of its sunscreen rules after that time.

Sunscreen formulation
Sunscreen formulations can vary greatly, depending upon the claims that the marketing department wants to make and how the product will be packaged, as well as cost of goods. Following is a typical sunscreen formulation. Most products are emulsions and most of these are of the oil-in-water (o/w) type. It should be mentioned that water-in-oil types will consistently provide a higher SPF than their o/w counterparts, and they are inherently very water resistant.
Lately, many companies are selling continuous-spray sunscreens. These are anhydrous systems—meaning they contain no water—and use very high levels of alcohol to solubilize the sunscreens and provide a cooling sensation to the skin.
Make sure to read ingredient lists on sunscreen products in order to identify which are included to offer real consumer benefit, and which offer no benefit and are for label claims only.