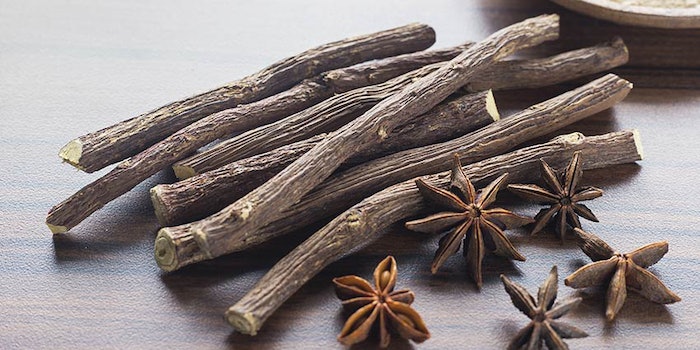 There’s more to licorice than meets the eye; and we’re not talking the black anise-flavored jellybean revered by a select few. Licorice, or liquorice, is the common name of Glycyrrhiza glabra, a flowering plant of the bean, legume or pea family Fabaceae. According to Wikipedia,1 this perennial legume is native to western Asia and southern Europe. Allthingsliquorice.co.uk reports2 the plant originated in Asia, then spread through the Middle East and into southern Europe, where the first report of its cultivation was at an English monastery in Pontefract, where its fame spread to the states and beyond.

Licorice root is known for its sweet taste due to the compound anethole found within it.1 This comes from its glycyrrhizin content, a compound reportedly 50 times sweeter than sugar.2 The same aromatic, unsaturated ether compound is also found in anise, star anise, fennel and several other herbs—although these are not botanically related to licorice.1 Thanks to this property, licorice extract is often used for flavoring,1 especially in candies and tobacco in some European and West Asian countries.

Read more about how this ingredient is used in spa products and treatments in our Digital Magazine...