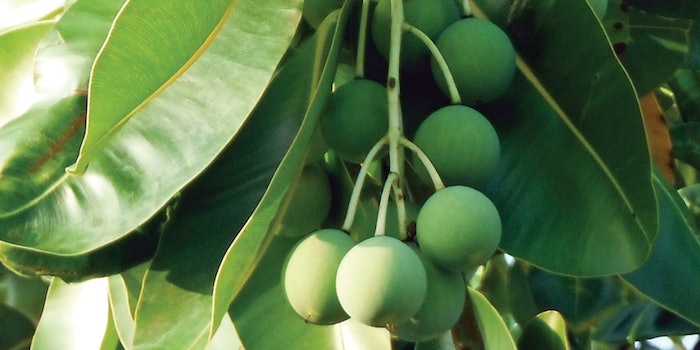 No doubt, if you’ve ever set foot on the Hawaiian Islands, you’ve seen kukui nuts. These large, brown seeds are often polished for decorative purposes such as native jewelry. Their oil serves many traditional functions—and not just as a medicine. By dispersing it on the sea, fishermen had a clearer view of what was beneath. It also was used to make candles, thus earning it the name “candlenut.”1 It even has been tested in complementary butanol/biodiesel/diesel fuel blends.2

According to the United States National Herbarium, the official state tree of Hawaii is the kukui nut—although interestingly, it is not native to Hawaii. The kukui nut tree was designated as such in 1959 thanks to its historical significance in the region’s colonization by Polynesians. Today, it is a widespread tree throughout the islands.1

Kukui or candlenut, scientifically Aleurites moluccanus, is a flowering tree in the Euphorbiaceae family. Its native location is reportedly difficult to establish due to its early and wide distribution by humans.3 According to the U.S. National Library of Medicine, Native Americans considered kukui a healing plant. The nuts supply omega-3 oil to the diet, and in crushed or roasted form, they relieved constipation.4 The sap was applied topically to heal insect bites, sores and chapped lips, and to help treat thrush in children.5 In mashed or liquefied form with breadfruit sap, kukui was applied to open wounds.5

A recent study published in Pharmacognosy Communications also highlighted the tree’s various parts for ethnobotanical applications. The bark is used to treat diarrhea and dysentery. Boiled leaves are used as poultices for headaches, fevers, ulcers and to treat joint inflammation; and the flowers and sap are used to treat fungal infections.6

A. moluccanus bark and nut extracts also have been shown to inhibit bacterial and fungal growth. Potent inhibition particularly was demonstrated against Staphylococcus aureus and Candida albicans with kukui bark extracts. Interestingly, the nut extracts were apparently devoid of bacterial activity although the researchers noted they only screened for two bacterial and one fungal species, and that additional studies examining other microbial species are lacking.6

The same study in Pharmacognosy Communications noted several phytochemical components in kukui nut extracts and essential oils. The lipid components linolenic acid, eicosanoic acid methyl ester and γ-tocopherol were reportedly abundant, and according to the authors, medium chain unsaturated fatty acids such as linolenic and eicosanoic have known antibacterial and anti-inflammatory activities.6

Another study, in the Journal of Ethnopharmacology, reported the main active constituent in A. moluccana is the flavonoid 2´´-O-rhamnosylswertisin. Here, it was tested as an alternative treatment for symptoms related to rheumatoid arthritis (RA), whereby it performed successfully. The authors also noted its use in folk medicine to treat pain, fever, asthma, hepatitis, gastric ulcer and inflammatory processes in general. They concluded the findings for RA, together with data from the literature, reinforce its anti-hypersensitivity and anti-inflammatory activity.7

As an aside, since the seeds also contain saponin and phorbol, in some cases, the raw nuts have been reported as mildly toxic. However, the kukui seed oil has no known toxicity and is not an irritant.1

The nut oil is commercially available from several cosmetic ingredient suppliers, who similarly report it aids in soothing and moisturizing skin, and relieves chapped skin and irritation. One supplier notes9 its sensory properties; i.e., it does not leave a greasy after-feel, and acts as a sunscreen solubilizer to lighten the feel of sun products. It also is suggested to treat psoriasis and eczema, and to benefit acne and other common skin issues.9

Yet another ingredient supplier highlights kukui nut oil’s nutritional value;11 namely its composition of polyunsaturated fatty acids including up to 34% of the omega-3 linolenic acid. The company also notes the oil absorbs quickly to soften, soothe and protect skin and hair, leaving both feeling nourished and hydrated. Furthermore, with its nearly colorless appearance and mild scent, kukui nut oil is versatile and is suggested for an array of formulations. It is reportedly well-suited for parched, dry, itchy, mature and problem skin types.11

In a final example, kukui nut is praised by a different ingredient supplier12 not only for its fatty acid content, but its anti-aging skin care benefits. The high linoleic acid content is said to contribute to ceramide synthesis and consequently, to the regenerative processes of skin. In turn, the water retention capacity of the skin is improved and the TEWL reduced. Alpha linoleic acid also provides a fluidizing effect on skin cell membranes, acting as a harmonizing moisturizer.12

Although the benefits of topical kukui are perhaps more well known in Hawaii, it can be found across the U.S. mainland, with products and treatments often highlighting its moisturizing power.

Nouveau Day Spa in Kennewick, Washington features the Kukui Coconut Escape ($150), which begins with a tropical body scrub. Warmed coconut milk is then massaged into the body, and following a vichy shower, kukui nut oil and coconut body lotion are applied.

You can find kukui in nearly all treatments at Spa by the Sea at the Waipouli Beach Resort in Kauai, Hawaii. For example, in its Mermaid's Delight (90 min., $235), a kukui coconut massage is the final step after a papaya pineapple body scrub and a volcanic clay body wrap.

At The Retreat at Tahoe Mountain Club in Truckee, California, kukui is one of the stars of the Kukui Coconut Oil Massage. The nut moisturizes and soothes the skin, while coconut helps stimulate cell repair and provides free radical protection.

Kukui has been tapped for both face and body moisturization by professional product makers.

Body Bliss uses kukui in a number of its products, including its Coconut Kukui line and its Luminous Vibrational Hair & Scalp Oil. In the Coconut Kukui Rosehip Stretchmark Formula, it is combined with rosehip fruits and chia seeds to nourish and repair skin with essential fatty acids, vitamins and beta-carotenes to resist skin damage and maintain elasticity.

Once again, science is proving the real benefits of folk medicine. Aloha and mahalo to those ancestral skin care pioneers.